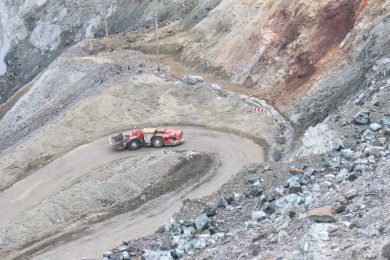 Eurasian Resources Group (ERG) has started to mine chrome ore at a new deposit, Pervomayskoye, in Kazakhstan (pictured). Mineable reserves at the deposit exceed 3 Mt of ore. The Donskoy Ore Mining and Processing Plant, which belongs to JSC TNC Kazchrome, owned by ERG, has already extracted the first 3,500 t.

The Pervomayskoye deposit is located within the site of Kazakhstan’s 10th Anniversary of Independence mine in Khromtau in the western part of the country. Maximum annual production at the deposit is expected to total 300,000 t of ore. Drifting operations took seven years to complete and under the current project the deposit will continue to be developed until 2025 (inclusive).

Maral Bekeyev, Director of the Donskoy Ore Mining and Processing Plant, said: “The unique experience that we have gained at this pilot deposit will be beneficial to us in the future when we start to develop the second stage of the mine. We are planning to use the cut-and-fill technique and we look forward to achieving a production rate of up to 6 Mt/y of ore.”

Meanwhile, the parameters of the cut-and-fill technique are defining the design of the mining block extraction process. “We are developing this deposit using an environmentally friendly approach that involves utilising waste and tailings. This will help to reduce waste dumping and harmful atmospheric emissions,” added Alexander Ermakov, Head of the Republic of Kazakhstan’s 10th Anniversary of Independence mine.

Meanwhile in the DRC, Frontier mine, owned by ERG, delivered more than 107,000 t contained copper in concentrate in 2016, an increase of 35% on 2015 output. Frontier is ERG’s flagship mine in the DRC and is the cornerstone of the group’s copper business in Africa. In 2016 the plant improved performance across many key indicators.

A revised production plan was launched by ERG in late 2015 to increase long-term copper production at Frontier by improving the efficiency and effectiveness of its operating model.

The growth was the outcome of considerable operational improvements and investment while the mine also changed the way it deployed contractors. Major benefits were realised from Q2 2016 onwards, resulting in a steady supply of copper ore, improved plant feed grades and plant throughput tonnages.

John Robertson, Frontier mine President – General Manager, said: “The production figures at our flagship Frontier mine are very encouraging and I am proud of what the team has achieved. This is a major step forward for the group and supports ERG Africa’s strategy to become a regional copper and cobalt champion. Our people are ERG’s greatest asset and their ability to plan, embrace change and deliver solid results is commendable.”

“Our team saw the increased production potential of Frontier and together with the group, production increases have been achieved sustainably, putting long term durable solutions in place to enable the plant to produce copper concentrate at a highly competitive cost and move the group further towards becoming a first quartile producer on the industry cost curve.”