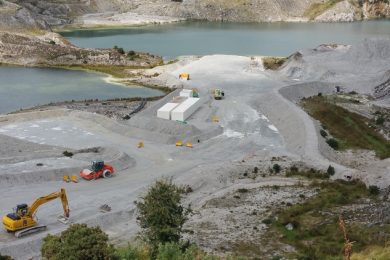 The ¡VAMOS! underwater mining team have visited several former mining sites over the last two years, investigating suitability for field testing. Following a careful selection process, eventually two mine sites were selected, in which the novel mining technique will be tried out. The first one is in the United Kingdom: Whitehill Yeo pit at Lee Moor, Devon. This site is kindly made available by Imerys, the world leader in mineral-based specialties for industry, which delivers high value-added, functional solutions to a great number of sectors, from processing industries to consumer goods and building products.

The pit is a flooded kaolin mine, which ceased operation in 2008. The kaolin, also known as china clay, is a decomposed form of granite and is being used in countless industrial applications. The team expects to encounter weathered granite in various grades in this pit.

The infrastructure present at the site, in combination with nearby facilities and services, made this site the first choice for ¡VAMOS! Early in 2017 it was decided to go ahead with making preparations for testing at Lee Moor. As the site had been out of service for a significant period of time, a bathymetric survey was carried out to examine the submerged environment.

While various ¡VAMOS! equipment was finalised being built and tested, and with the development of software and communications still ongoing, civil works at Lee Moor started in June. A safe working area was required, to bring in the equipment with heavy transport trucks and launch the system components. Also a slurry depot was created on land, which will capture the material being pumped up as a slurry while mining underwater. Meanwhile the site set-up has been completed with offices, fencing, welfare and workshop units. During the trials, the Lee Moor site operates a strict Safety regime in accordance with the UK Construction Design and Management Regulations and Quarry Regulations.

At the end of August the first equipment arrived on site, and the pontoons of the Launch & Recovery Vessel (LARV) built by Damen (The Netherlands) have now been deployed and assembled, with outfitting going on until mid-September. The Mining Vehicle (MV) was built at Soil Machine Dynamics’ facilities in Newcastle Upon Tyne (UK) and is in the final stage of its Factory Acceptance Testing. Together with the Shore Control Cabin, the MV will be brought to site and the MV will be launched on the LARV soon. Positioning, Navigation and Awareness systems will be integrated next, after which the full system can be commissioned.

The ¡VAMOS! Team is expecting that at Lee Moor the equipment can be tested to its limits and thus contribute to the project goals and the EU’s raw materials strategy.