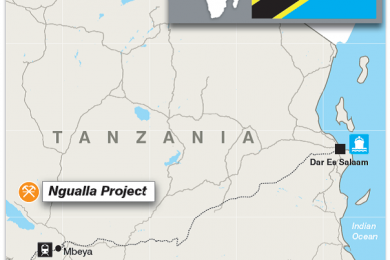 Peak Resources provides an update on the Special Mining Licence (SML) application for the Ngualla Rare Earth mine and multi-stage processing plant in Tanzania.

The SML application was lodged with the Ministry of Minerals in August 2017. Due to changes in the Tanzanian legislation surrounding all mining activities in the country the SML application is yet to be considered by the government. The delay has primarily been caused by the need to wait for the establishment of the government’s new Mining Commission. The new commission has been given powers under the new legislation to consider all new mining and special mining licence applications. At a meeting in Dodoma with Peak on 14 February 2018 the Commissioner for Minerals, Prof. Manya stated that under direction from the President the Mining Commission will be established within one month.

During the hiatus period with no commission in place, Peak has continued direct communications with the government including with the new Minister for Minerals Angellah Kairuki, the two deputy Ministers for Minerals; Hon. Stanslaus H. Nyongo and Hon. Dotto Biteko, and the Commissioner of Minerals Prof. Shukuruni Elisha Manya.

The next steps for Peak will be to conduct a technical workshop with the Ministry of Minerals and other relevant government stakeholders in Dodoma in early April. The workshop has been directly requested by the Deputy Minster Hon. Biteko and will assist the government to consider the SML application in a timely manner.
Highlights:
• Tanzanian officials confirm the Mining Commission to be formed within four weeks
• Mining licence applications to be fast tracked upon the formation of the commission
• Peak’s licence application considered a priority for approval
• Peak has commenced direct technical discussions with the Ministry and government stakeholders.

Rocky Smith CEO said “Peak’s Ngualla project is the leading undeveloped rare earth project in the world as a result of the resource grade/quality and the fully integrated mine to market solution. Peak’s decision and capability to refine the rare earth metals will extract the maximum value while maintaining absolute control of the finished products. This is one of the key differentiators from our competitors, who will either sell mixed concentrates or rely on outside groups to produce products for them. We see getting the SML granted, which I am now pleased to say is looking imminent, as a major milestone toward getting into production and for adding value for our shareholders.”

Ngualla is one of the world’s largest known and highest grade undeveloped neodymium (Nd) and praseodymium (Pr) rare earth projects.

The Ngualla rare earth project is centred on the Ngualla Carbonatite in southern Tanzania, 147 km from the city of Mbeya on the edge of the East African Rift Valley. The name ‘Ngualla’ comes from the Swahili word for ‘bald head’, which reflects the appearance of the hill – mostly bare land on which there is no habitation, agriculture, grazing or reserves.

The weathered Bastnaesite Zone that is the target for development occurs as a thick blanket of high grade rare earth mineralisation from surface on Ngualla Hill. Rare earths are contained within the mineral bastnaesite within a weathered host rock that contains very low levels of phosphate, carbonate, uranium and thorium compared to other rare earth deposits.

This makes it easy-to-mine by low strip ratio open pit techniques and subsequently upgraded to a high grade processed concentrate through a multi stage processing plant on site.

The Ore Reserve estimate for the Ngualla Project is 18.5 Mt at 4.80% REO for 887,000 t of contained REO. ASX Announcement Ngualla Rare Earth Project – Updated Ore Reserve as of 12 April 2017 provides further details and assumptions. The Ore Reserve represents just 22% of the Total All Resources Mineral Resource but is sufficient to support a mine life of 26 years.

The company plans to export approximately 32,700 t/y of rare earth concentrate grading 45% REO from Tanzania to a UK refinery where it will be processed and converted into four saleable products, namely a mixed Neodymium and Praseodymium 99% pure oxide (2,800 t), a mixed heavy and SEG carbonate (330 t*), Lanthanum carbonate (4,230 t*) and a Cerium carbonate (1,920 t*)
N.B. * tonnes presented as contained Rare Earth Oxide equivalent

Peak’s main minerals neodymium (Nd) and praseodymium (Pr) are the core ingredients for manufacturing permanent magnets (NdFeB magnets), which are used in high-efficiency electric-motors and generators enabling low carbon technologies, like wind energy, E-mobility and many others. The demand for NdPr is expected to grow rapidly as one of the core enablers for the upcoming new technology revolution.

The planned production basket is in line with the highest value and growth market. NdPr accounts for 80% of the company’s projected revenue and represents the main focus of the marketing, sales and business development strategy. With its unique Ngualla deposit in Tanzania, Peak Resources is perfectly positioned to become a sustainable and long term supplier to meet increased global demand.