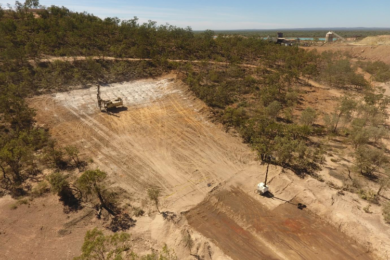 Zinc producer Red River Resources Ltd announces that development activities have commenced at Far West – Red River’s second underground mine. The Far West surface development contract has been awarded to PYBAR Mining Services who are currently undertaking underground mining operations at Red River’s West 45 underground mine.
The Far West portal site has been cleared, and drilling has commenced with the main blast expected this week.
Underground development is expected to commence shortly after the completion of the box cut. The company is
going through the contractor selection process for the UG development. Far West has a current JORC Reserve of 1.5 Mt @ 12.0% zinc equivalent and a minimum mine life of five years. It is the down dip extension of the Thalanga West mineralisation, and is classified as volcanogenic-massive-sulphide (VHMS) style of mineralisation where copper, zinc, lead and silver mineralisation is found associated with a suite of sulphide minerals.