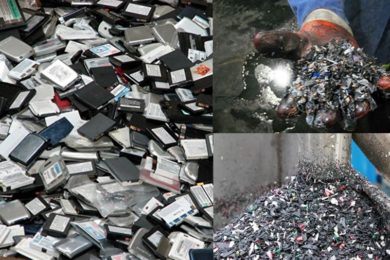 Australia should add lithium-ion battery recycling to its hardrock mining and processing expertise, according to a report from the Commonwealth Scientific and Industrial Research Organisation.

This waste is growing 20% each year as consumer demand for portable and rechargeable electronic equipment and electric vehicles accelerates. As it stands only 2% is recycled – all of which happens overseas.

The report estimates  Australia is losing out on between A$813 million and A$3 billion of value based on current day commodity prices from not recycling the batteries. That is down to the valuable cobalt, lithium, base and other metals and graphite that could be reused.

“Low battery recycling rates can be overcome through better understanding of the importance of recycling, improved collection processes, and by implementing ways to efficiently recycle materials,” CSIRO’s report said.

An effective recycling industry could also stabilise global lithium supplies to meet consumer demand, according to the report.

It estimates that, if recycled, 95 % of components can be turned into new batteries or used in other industries. In comparison, of the 150,000 t of lead-acid batteries sold in 2010, 98 % were recycled.

As it stands, the majority of Australia’s battery waste is shipped overseas, with the waste that remains left in landfill. This leads to potential fires, environmental contamination, and risk to human health.

CSIRO research is supporting recycling efforts, with research underway on processes for recovery of metals and materials, development of new battery materials, and support for the circular economy around battery reuse and recycling.

CSIRO battery research leader Dr Anand Bhatt said: “As a world leader in the adoption of solar and battery systems, we must responsibly manage our use of lithium-ion technology in support of our clean energy future; CSIRO has set out a pathway to do this.

“The value for Australia is three-fold. We can draw additional value from existing materials, minimise impact on our environment, and also catalyse a new industry in lithium-ion re-use/recycling.”

Dr Bhatt and his team are working with industry to develop processes to support the transition to domestic recycling of lithium-ion batteries.

“The development of processes to effectively and efficiently recycle these batteries can generate a new industry in Australia. Further, effective recycling of lithium batteries can offset the current concerns around lithium security,” he said.