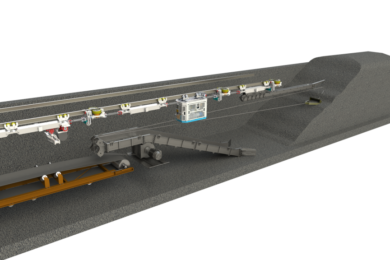 Torex Gold is weighing up the use of an innovative technology that could provide an efficient and cost effective means of moving people, mining devices, and ore out of steep underground mines.

The company, which is back in action at its ELG gold mine in Mexico after a long strike at the operation that started in 2017, said in its June quarter results that it had recently come to an agreement with its CEO, Fred Stanford, to acquire his interests in ‘Muckahi’.

Stanford conceptualised and patented the Muckahi process and has been working with Canada-based engineering firm MEDATECH to develop his methods and come up with the necessary equipment to make his process work.

Muckahi makes use of overhead rails as an efficient and cost effective means of moving people, mining devices and ore out of steep underground mines. The modififed machinery also allows for increased production rates and less handling, moving the process towards continous production, according to MEDATECH.

The mining system is currently in the evaluation stage, but is being considered for use at Torex’s Media Luna gold project in Mexico. There is a revised preliminary economic assessment on Media Luna due soon that is expected to feature the use of this technology.

The 2015 PEA on Media Luna envisioned an underground operation with expected average annual production of 313,000 oz of gold-equivalent at an average all-in sustaining cost of $636/oz.

The recovery of the Media Luna resource was planned to be through underground mining methods at 7,000 t/d with the mineralised material transported via a hybrid underground/aerial/underground rope conveyor to the ELG processing plant. The conveyor belt would be 6.7 km in length with a 360 m vertical drop over its length.

Torex said it was planning to run a technical session for investors and analysts on the Muckahi process next month.