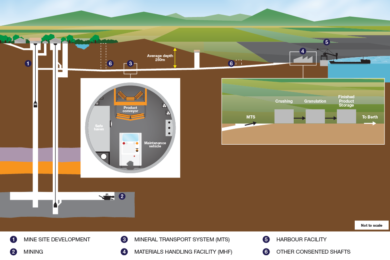 Construction firm STRABAG and engineering group Jacobs have become the latest recipients of contracts for the Sirius Minerals’ owned North Yorkshire polyhalite project in the northeast of England.

STRABAG, which had already been awarded a design and build contract for the first drive of the mineral transport system (MTS) tunnel between Wilton and Lockwood Beck, near Teesside, has been contracted to construct drives two and three. Jacobs, meanwhile, has been given an engineer, procurement and construction contract for the materials handling facility (MHF) at Wilton.

These announcements came as Sirius updated its capital cost estimate for stage two of the project, which is expected to see the mine expand from 10 Mt/y of polyhalite to 20 Mt/y.

This has seen the stage two capital requirement go from $3 billion in November 2016 to $3.6 billion today.

The majority of the cost increase is associated with the MTS (pictured), which Sirius said reflected its own increased understanding of the “geotechnical characteristics of the strata within which the MTS will be excavated”.

This followed further ground investigation and seismic work that led to a refinement of the parameters set out in the geotechnical baseline report upon which the tunnelling contract was determined.

Chris Fraser, Managing Director and CEO of Sirius Minerals, said the cost increase reflected “an optimisation of the MTS tunnel design and a significantly improved risk allocation for Sirius to support the senior debt financing”.

The MTS cost increase is driven by a combination of the following factors:

The MTS includes a 37 km tunnel for a conveyor system to transport the polyhalite from the mine near Whitby to Wilton on Teesside for processing. STRABAG will construct the tunnel by using a Tunnel Boring Machine and the company expects to use a high-capacity conveyor belt system capable of transporting 20 Mt/y of polyhalite at 7.5 m/s.

The MHF will be constructed and managed by Jacobs’ UK subsidiary, with the EPC contract agreed on a target price basis, with financial incentives for completing the scope of work under budget, and financial penalties should completion be late or the cost be above the target price.

Sirius said its procurement process for the project is nearing completion for the major packages and it is in the final stage of negotiations for the outstanding scopes of work.

Included in this is the MTS fit out, which includes the supply and installation of the MTS conveyor and the associated power supply, and the port facilities which includes construction of the outload circuit, wharf and product storage facility.

Sirius has identified STRABAG as its preferred contractor for the MTS fit out and is in advanced negotiations for provision of port facilities.

As the upfront capital for stage two of the project has increased, Sirius has developed a construction programme that defers the initial costs associated with the port facilities and has amended the scope of work to include temporary truck and train transportation of product from the storage facility at Wilton to the port.

“This enables the construction of the overland conveyor to be deferred until such time as it can be funded through operating cash flows, currently assumed to be 2025,” Sirius said. 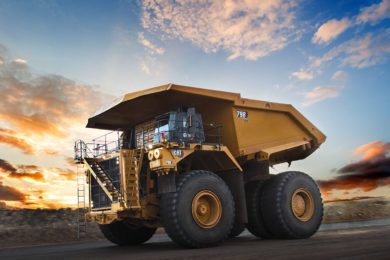