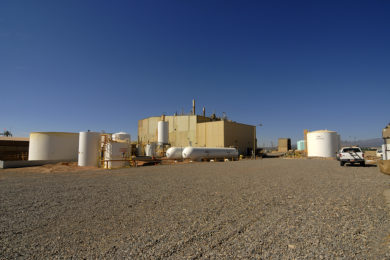 Energy Fuels Inc expects to resume vanadium production at its 100% owned White Mesa Mill in mid-November 2018, producing significant quantities of salable V2O5 product by the end of December 2018. When production begins, Energy Fuels will be the newest vanadium producer in the world and the only primary producer of V2O5 in North America. In addition, the company is currently preparing to conduct a test-mining program that selectively targets high-grade V2O5 resources at its 100%-owned La Sal complex of uranium/vanadium mines in Utah, with the goal of significantly increasing productivity and mined grades and reducing mining costs per pound of V2O5 and U3O8 recovered.

Energy Fuels’ White Mesa Mill, located near Blanding, Utah, is currently the only facility in the US capable of processing conventional mined vanadium resources. As a result, no other company in the US is likely to enter primary vanadium production in the near-term, because no other company has access to the mill at this time.

Vanadium prices have risen by over 150% in the past year due to a number of factors, including production cuts and significant increases in demand due to the implementation on November 1, 2018 of new rebar standards in China that can only be achieved through increased use of vanadium (with limited substitution). In addition, vanadium demand could increase significantly in the coming years due to the commercialization of vanadium batteries used in connection with renewable energy generation. As of September 23, 2018, the mid-point price of V2O5 as reported by Metal Bulletin was $22.63/lb, as compared to $9.00/lb on September 29, 2017.

As previously announced, and starting in November 2018, Energy Fuels expects to begin vanadium production from the pond solutions at the White Mesa Mill, which it estimates contain some 4 Mlb of recoverable V2O5. Historically, the mill has been a significant producer of vanadium, and the company estimates that the mill has produced about 45 Mlb of V2O5 since it was constructed in the early-1980s, having last produced over 1.5 Mlb of V2O5 mined from the La Sal complex in 2013. The company has spent the past several months retrofitting and upgrading the mill’s vanadium recovery circuit in preparation of this upcoming production run. Once production reaches a steady state, Energy Fuels expects to produce approximately 200,000 to 225,000 lb/month of V2O5 from the pond solutions for a period of 16 to 20 months, subject to market conditions, costs, and recoveries. Further, the mill has historically produced a relatively high-purity vanadium product, which if achieved again, offers the potential in today’s market to command a premium above standard V2O5 prices. The pond project also offers the company excellent flexibility, including the ability to turn production on-and-off quickly and at limited cost, in response to evolving market conditions. While the mill has never to date attempted to commercially recover vanadium dissolved in the ponds, extensive on-site test work indicates that the project has a high probability for success.

In addition, Energy Fuels is commencing limited conventional vanadium production at its 100% owned and fully licensed, permitted, and constructed La Sal complex. In Q4 2018, it expects to begin a test-mining program to evaluate different approaches that selectively target high-grade vanadium zones, thereby potentially increasing productivity and mined grades for vanadium and decreasing mining costs per pound of V2O5 and U3O8 recovered. The company also expects to conduct additional exploration and in-fill drilling at La Sal, with specific analysis for vanadium, which was not normally done in the past, with the goal of expanding and upgrading the vanadium resources at this project.

In preparation for this test-mining program, the company has already completed significant surface and underground refurbishment at La Sal, and has re-established services in areas of the mine complex with the greatest potential to hold high-grade vanadium resources. The company expects to commence the test-mining program during Q4-2018, which is expected to take about six months to complete. If the program is successful and vanadium prices remain strong, the company may continue mining beyond the planned campaign.

Historically, the uranium/vanadium mines in the La Sal and Uravan Mineral Districts were mined using then-available technologies and production methods that focused mainly on recovering the uranium resources. The ore at the La Sal complex contained vanadium at a historic ratio of roughly 1:5 (the vanadium concentration five times higher than the uranium concentration). However, the actual vanadium content was only ultimately known following milling. The company is actively investigating above-average grade vanadium areas of mineralization that were not mined in the past due to lower uranium content. Energy Fuels plans to introduce real-time portable XRF technology to better define areas containing high-grade vanadium resources. The test-mining program announced today is expected to produce approximately 5,000 t of mineralized material, which would be further tested and analyzed at White Mesa. The company believes this new approach has the potential to significantly lower mining costs at La Sal complex by selectively targeting the high-grade vanadium and potentially past un-mined resources. Any new mining approaches developed in this program may also be applicable to the company’s other permitted and standby uranium/vanadium mines in the region, including the Whirlwind and Rim mines.

Mark S. Chalmers, President and CEO of Energy Fuels stated: “When Energy Fuels commences vanadium production in November, we will be the only primary producer of V2O5 in North America. This position brings the potential for Energy Fuels to generate significant cash flow in today’s strong vanadium price environment, especially with the steel industry recovering in the US. Further, because we own and control 100% of the only operating conventional vanadium mill in North America, no other company in the region can currently produce vanadium, unless Energy Fuels provides access to the facility, and currently there are no outstanding commitments. This places Energy Fuels in a truly unique position to potentially realize significant cash flows from our vanadium assets in today’s tight resource market.

“We believe the commencement of vanadium production from the ponds at the White Mesa mill is well timed in today’s strong vanadium market. And, over the longer-term, we are hopeful that today’s real-time mining technologies will provide for a possible paradigm shift that has the potential to improve the economics of future vanadium and uranium mining in this well-known and prolific high-grade district.”