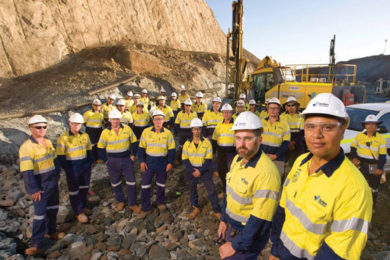 It has been awarded a 15-month extension by Talison Lithium for services at the Greenbushes mine, in Western Australia, which is currently in the process of going through an expansion to boost lithium carbonate equivalent production to more than 160,000 t/y.

The contract extension is for blasthole drilling, grade control and blasting services and builds on the relationship from 2011 when the original contract was awarded. The contract, which incorporates an increased scope of works, has an estimated value of A$13.5 million ($9.6 million), according to NRW.

The subsidiary has also been awarded a sub-contract for drill and blast services at the South Flank iron ore project, also in Western Australia, which is owned by BHP.

The contract is valued at some A$11 million and will have a duration of eight months, NRW said.

South Flank is a $3.6 billion development, involving construction of an 80 Mt/y crushing and screening plant, an overland conveyor system, stockyard and train loading facilities, procurement of new mining fleet and substantial mine development and pre-strip work. It is expected to result in first ore coming out from the new mine in 2021.