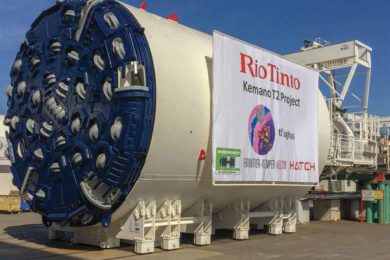 Rio Tinto, together with the Cheslatta Carrier and Haisla First Nations, has celebrated the launch of the tl’ughus tunnel boring machine, a key milestone towards completing the Kemano Second Tunnel project for the BC Works aluminium smelter in Kitimat, British Columbia.

The 1,300 t machine was named by the Cheslatta Carrier nation after a giant snake that, according to legend, once bored through the mountains and landscape around the nearby Nachako Reservoir.

It will dig 7.6 km of tunnel through a mountain as part of a C$600 million ($458 million) project to enhance the long-term security of a clean power supply for the BC Works smelter.

Rio Tinto Aluminium Managing Director Altantic Operations, Gervais Jacques said: “Launching the tl’ughus in partnership with the Cheslatta Carrier and Haisla First Nations is an important milestone for our world-class aluminium operations in British Columbia. Our smelter in Kitimat produces some of the world’s lowest carbon aluminium and this project will enhance the long-term security of its supply of clean, renewable hydropower.”

Construction of the Kemano Second Tunnel project is expected to be complete in 2020. It will supply the Kemano powerhouse with water from the Nachako Reservoir, creating a back up to the original tunnel built over 60 years ago.

Frontier Kemper Aecon has been selected as the main contractor for the project, with Hatch being the EPCM. Herrenknecht has supplied the TBM.

The project will see some 250,000 m³ of tunnel rock excavated by the tl’ughus, while 8.4 km of an existing portion of the second tunnel (excavated in the 1990s) will be refurbished.

Phase 1 of the project was completed in 2013 to coincide with the Kitimat Modernisation project and involved construction of interconnections to the existing portion of the second tunnel.

The Cheslatta Nation selected the name for the tunnel boring machine – tl’ughus – as it shares many parallels with the Kemano second tunnel project, according to Rio.