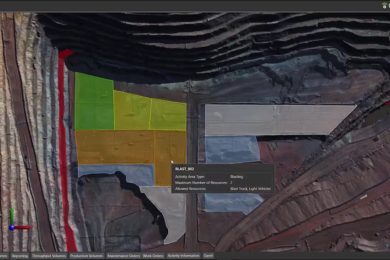 XECUTE is the latest in RPMGlobal’s extensive line of mine planning and scheduling software solutions to receive an update.

XECUTE 1.10 builds on the core capabilities of XECUTE and features advanced upgrades to improve the live planning environment. This uses “enterprise enablement” to deliver real inter-departmental collaboration, according to RPMGlobal.

XECUTE was designed to bridge the gap between short-term planning and operational execution and has been adopted at several sites globally, RPMGlobal says.

The latest updates have seen the product integrated with MinVu, a suite of products the company acquired earlier this year.

When the MinVu acquisition was announced in December 2017, RPMGlobal said XECUTE would “be able to immediately utilise the MinVu integration adaptors to bring back data such as Equipment GPS coordinates, actual bucket positions, material movements, drill hole details, actual production rates and incorporate them into the production plan. This will extend the functionality of XECUTE whilst increasing the number of modules in the RPM suite.”

MinVu’s ability to pull this data directly from areas where it would otherwise remain in silos, means manual data processes are eliminated and users spend less time gathering and manipulating data and producing reports, according to RPMGlobal.

RPMGlobal has also started to build XECUTE into an augmented reality environment on iPads, iPhones and Android devices, according to Michael Baldwin, Executive General Manager of Product Strategy.

“This means you can access the information on mobile devices regardless of your physical location, which is often a problem with remote mining operations. This also allows for clear communication of the plan, including any updates to the plan,” he said.

The latest release also sees new scheduling functionality, including upgrades to the integrated product optimiser as well as user interface improvements that make the live planning a better overall user experience, according to the company.

XECUTE aims to minimises data entry and maximise planning value and adaptability by using automation to connect planning with operations, with 3D cross-team collaboration and integrated design and scheduling, according to RPM Global.

The system combines RPMGlobal’s proprietary Product Optimiser with a game-inspired 3D interface. Enterprise data feeds provide planners with the most up-to-date schedule inputs, allowing outputs to be automatically pushed to downstream systems and closing the loop between planning and execution.

RPMGlobal said: “The companies that have adopted XECUTE have realised the potential of a collaborative, live planning environment and the improvements this could bring to their mining operation.”