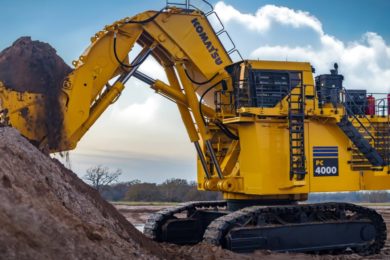 The new excavator is based on the PC4000-11 released at MINExpo in 2016 – but incorporates a Tier 2 emissions standard engine, rather than the Tier 4 Final engine fitted to the PC4000-11.

It achieves its productivity increases through having the highest digging forces – both in backhoe and face shovel configurations – in its class, a large-capacity 23 cu m backhoe bucket (22 cu m in shovel mode) and faster cycle times through variable-speed slew motors, according to the company.

Safety standards for both operators and maintenance crews have been improved through several upgrades, including 45° stairway access stairs and factory-fitted exit ladders.

“Apart from the engine, the PC4000-6 Series 3 is the same as the PC4000-11 released in Las Vegas – including all the safety and technological developments it incorporated. Komatsu can now supply the latest design and technology with a Tier 2 option to Australian mines not requiring the Tier 4 PC4000-11 model,” he said.

“For that reason, we are offering this model with the well-known and proven Tier 2 compliant Komatsu SDA16V160E-2 engine for Australia. And it comes direct from the factory aligned with Australian mining requirements, so minimal modifications are required.”

Hall said Komatsu Australia brought the first PC4000-6 Series 3 to the country in the June quarter of 2018 in backhoe configuration.

“This size and configuration of excavator is a flexible loading tool option for many Australian mining operations and, with the local industry showing improved growth and activity, bringing in a stock machine is a sign of our confidence in the industry’s future,” he said.

“We see excellent potential for this model and are keen to see the advantages and improvements it delivers used in mining operations in Australia.”

Upgraded safety features are key improvements on the PC4000-6 Series 3.

“Another safety advance is a new emergency egress system, incorporating emergency exits on two sides of the machine, ensuring high safety standards for all personnel on the machine,” Hall said.

A flipdown two-piece ladder, with anti-slip surfaces helps ensure quiet and safe exit from the machine in case of emergency, while the front window of the cabin is 19 mm thick impact-resistant glass, giving additional operator protection.

The excavator’s control system has been simplified and upgraded, using Komatsu controllers to reduce nodes and provide additional redundancy for improved efficiency.

“As well, the machine is Modular Mining’s ProVision ready, allowing it to incorporate a machine guidance system that integrates with mine planning software.

In backhoe configuration, the machine has:

In face shovel configuration, the machine has: