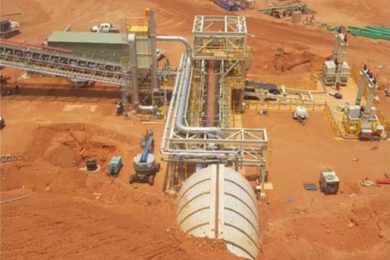 Gold Road Resources and Gold Fields’ jointly-owned Gruyere gold project in Western Australia is on track to pour first gold in the June quarter, the companies said in a construction and commissioning update this week.

Construction of the project, around 200 km east of Laverton in WA, was 91.2% complete as of January 18, 2019, with first ore mined on schedule this month. Downer, the mining contractor, has commenced double‐shift operations as part of the production ramp‐up, the companies said.

To de‐risk the project start‐up, a significant amount of ore is expected to be stockpiled in advance of first gold production, the companies noted, adding that construction works in the primary crusher area were substantially complete. Ore commissioning of the primary crusher to coarse ore stockpile circuit is in progress, they said.

The remaining process plant construction works are concentrated in the milling, carbon-in-leach and elution areas, and include piping, electrical and instrumentation installations and progressive commissioning of systems and equipment through these areas.

Gold Road and Gold Fields said the project remained on schedule for first gold production in the June quarter and within previously announced forecast total cost estimates of A$621 million ($445 million).