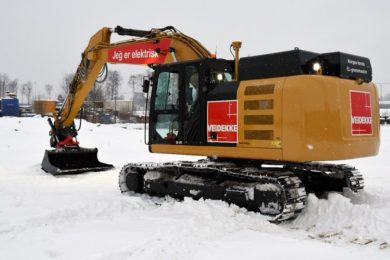 Pon Equipment, together with Caterpillar, has developed the world’s first battery-electric 26 t excavator, according to Norway-based construction company Veidekke.

After extensive testing with a prototype, eight machines are now in production, with the very first in use by Veidekke.

While not in the same class as mining excavators, this battery-electric machine is another example of OEMs manufacturing diesel alternatives with increasingly larger payloads and batteries.

Veidekke’s Knut Egge said in a press release (translated from Norwegian) that the company wanted to reduce its greenhouse gas emissions and, at the same time, increase its competitiveness, adding that the new excavator would save some 52 t/y of CO2 emissions compared with the diesel alternative.

The rechargeable battery-powered excavator is a remodeled Caterpillar 323F Z-line used for the loading of trucks, Veidekke said.

The excavator is enabled by Danfoss’ EDITRON drivetrain, according to Tomi Ristimäki, OEM Sales Director at Danfoss EDITRON.

The machine is able to operate for up to seven hours on a single battery charge under nominal load, according to Danfoss. “The electric excavator is zero emission, and significantly quieter than the former diesel machine, which makes it ideal for use in urban areas with noise restrictions,” the company added.

EDITRON powertrain systems are rugged and compact, with smart software controls suitable for hybrid and electric applications within the power range of 30-2,000 kW, according to Danfoss.

Pon Equipment CEO, Erik Sollerud, said the company’s mechanics have been rebuilding, adapting and testing the battery-electric machines for over a year together with specialists from Caterpillar. Among other things, the engine, diesel tank, and some equipment have been replaced with electric motors, motor controllers and heavy-duty lithium batteries, he added.

Construction machinery in Norway, according to Statistics Norway, accounts for a total of 650,000 t/y of CO2 emissions.