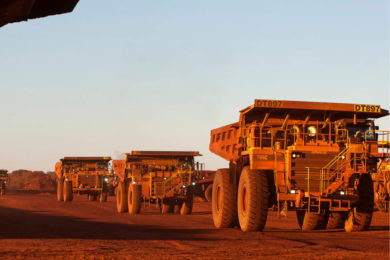 NRW Holdings has reported year-on-year increases in revenue and earnings in the six months to December 31, 2018, and says its focus on securing work in the iron ore sector has started to pay off.

The company’s order intake in the six months totalled A$1 billion, increasing total work in hand to A$2.4 billion, it said.

Jules Pemberton, NRW’s CEO and MD, said “Not only have we delivered incremental earnings growth, but we have been able to maintain strong cash flows through the period to reduce net debt to A$12.8 million and gearing to 4.3% despite an increase in capital expenditure driven by the purchase of key mining assets.

“All businesses performed on or above plan and it is worth noting that the Golding business has now generated cash equal to its acquisition cost within the first 14 months of ownership.”

The company, in previous outlook commentaries, mentioned NRW was looking to secure work on iron ore sustaining projects in Western Australia; a target that the company is starting to deliver on. Pemberton said: “Progress to date has been extremely positive following the awards of South Flank for BHP, in July 2018, the Koodaideri Plant site for Rio Tinto, announced in January 2019, and the award of Fortescue Metals Group’s Stage 1 Eliwana rail package, in February 2019.”

On top of this, NRW Holdings also announced the acquisition of the RCR Mining Technologies (RCRMT) business last month. On this transaction, Pemberton said: “The RCRMT business has developed a wealth of intellectual property across a range of products and processes and are recognised as leaders by global resource clients The acquisition will allow the company to provide incremental services, in line with our strategic objectives, to a number of core clients common to both NRW and RCR MT and is a very strong foundation on which to build a broader maintenance services business.”