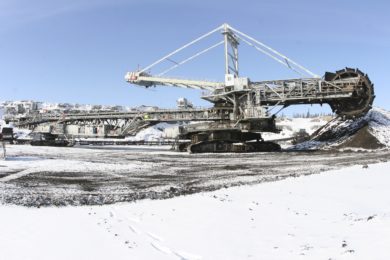 Leading oil sands miner Syncrude recently took a look back at its transition from bucketwheel to truck and shovel mining that took place in the late 1990s. “Big trucks and shovels – that’s usually what comes to mind when you think of mining at Syncrude today. However, looking back 20 years ago, Syncrude’s mining machines were even bigger. Standing at about 30 m above ground and 120 metres in length (longer than a football field), Syncrude’s bucketwheel reclaimers were first-generation oil sands equipment and are remembered as giants of mining. On March 11, 1999, Bucketwheel Reclaimer No 2 was retired, marking a shift in mining at Syncrude.”

Before production mining went to truck and shovel operation at Syncrude, draglines mined the oil sand and piled it in windrows along the surface of the mine. Then, bucketwheel reclaimers dug up the oil sand from these windrows and placed it on a conveyor system that led to the dump pocket and fed to the Extraction Plant. “Bucketwheel Reclaimer No 2 was used from 1978 until 1999 at Mildred Lake site and was the first of four bucketwheel reclaimers at Syncrude. It was exclusively designed and constructed by Krupp and O&K of Germany for operation at our site. Also, No 2 notably mined over 1 Mt in a single week, and more than 460 Mt of oil sands during its operating life.”

Although Syncrude’s mining operation made significant progress with the use of draglines and bucketwheels, the transition to truck and shovel allowed for better manoeuvreability and reduced costs associated with these large pieces of equipment. “The bucketwheel had a lot of mechanical parts to take care of and so did the accompanying conveyor system that moved the dry oil sands to Extraction. This created extra challenges for maintenance of the equipment as we would lose 25% of our production when we had a bucketwheel or an associated conveyor down,” says Scott Upshall, Mildred Lake Mining Manager. “Syncrude’s ability to be more selective with its mining also benefited with the change in mining equipment. Trucks and shovels work smaller areas of land which supported better management of blending for the extraction process. This wasn’t possible two decades ago due to the sheer size of our former mining equipment.”

The change in mining equipment wouldn’t be possible without the support of Syncrude’s workforce. “No layoffs took place and employees were trained and successfully transitioned to operate and maintain the addition of our truck and shovel fleets. The retirement of Bucketwheel Reclaimer No 2 demonstrates our commitment to progress mining operations and also an example of our employees’ ability to adapt and succeed. Syncrude is proud to celebrate this moment in our history.”