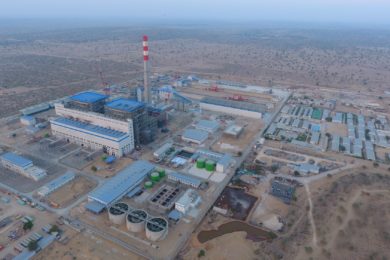 Engro Powergen Thar Ltd (EPTL) says it has successfully tested and energised its first 330 MW unit of the combined 660 MW coal-fired power plant in the Thar Coalfield of Sindh, Pakistan, hooking the plant up to the national grid.

Engro Powergen Thar was formed in 2014 to set up a 660 MW power project in the Thar Block II. The company is a joint venture between Engro Powergen Ltd (with 50.1% ownership), China Machinery Engineering Corp (CMEC – the EPC contractor for the project), Habib Bank Ltd and Liberty Mills Ltd. The project is one of the early projects of the China-Pakistan Economic Corridor.

The 660 MW power plant will use circulating fluidised bed technology to burn coal. Once commercial, the plant will send 660 MW of electricity through a 282-km long 500 kV Double Circuit Quad-Bundle transmission line from the EPTL plant to Matiari in Sindh province. The power plant – although the first in Pakistan running on Thar coal – complies with all local environmental laws and has voluntarily adopted various international compliance standards, according to EPTL.

The company said: “The synchronisation of the first unit of the power plant is a considerable achievement given that the project has been constructed in a record time of under three years – as per schedule and projected costs, a feat in itself given the complexity of the project.”

The EPTL power plant will use 3.8 Mt/y of coal supplied by Sindh Engro Coal Mining Co’s open-pit mine, with both projects set to achieve commercial operation in June, it added.

Together both the mining and power projects, managed by Engro Energy, will be able to bring average foreign exchange savings of up to $1.6 billion/y, according to EPTL.

The President of Engro Corp, Ghias Khan, said: “The first sync of the power plant on Thar coal is truly a momentous occasion for entire Pakistan. Engro’s commitment to the Thar coal project goes back almost a decade when we entered into a public private partnership in 2009.

“The synchronisation of the first unit of the 660 MW power plant is both testament to Engro’s capacity to engineer excellence and deliver on this project of national importance which will ensure the energy security of the county.”