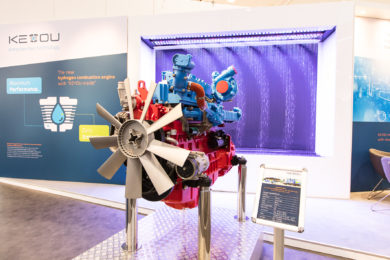 The letter of intent, which will also include hydrogen engines for power generation, could see the two firms bring these engines to production readiness.

Underground mining equipment manufacturers such as GHH Fahrzeuge use DEUTZ engines in their LHDs.

DEUTZ said: “As a leading global manufacturer of innovative drive systems, DEUTZ is seeking to play a pioneering role in the development of high-quality, eco-friendly and efficient engines.

“Alongside the E-DEUTZ strategy, which launched last year and has been pursued with purpose ever since, the collaboration with KEYOU represents a further step forward in the advancement of alternative drive technologies and fuels.”

DEUTZ CEO, Dr Frank Hiller, said: “The use of alternative fuels such as hydrogen is growing in importance. We believe that this drive solution will be a valuable addition to our electrification strategy and play an integral role in the zero-emission vehicles of the future.”

By working on the development of a hydrogen combustion engine, DEUTZ is also offering an alternative to fuel-cell technology, it said. The company’s expertise in combustion engines is being combined with KEYOU-inside technology, which can convert conventional production engines to run on hydrogen. “The technology is extremely scalable, both for on-road and off-road applications, and it can be used in a range of hybrid configurations, including in combination with electric drives,” DEUTZ said.

KEYOU has developed a prototype for its KEYOU-inside technology that can turn a conventional diesel engine into a drive based on state-of-the-art hydrogen technology, according to DEUTZ.

DEUTZ provided support as a development partner, supplying the engine – one of its standard six-cylinder models – and sharing its engineering expertise. The resulting hydrogen combustion engine is extremely cost-efficient, which makes it an attractive alternative to electric drives, fuel-cell drives and other zero-emission systems, the company said.

KEYOU’s first 7.8-litre prototype DEUTZ engine was unveiled to the public in 2018 at the Bauma China trade fair and will also be showcased in April 2019 at the Bauma fair in Munich, Germany.

Specific pilot projects with vehicle manufacturers and end users are in the planning stage, with the appearance of the first prototype vehicles expected in the first half of 2020. The aim is to bring them to production readiness by 2021/22.

Alvaro Sousa, CTO of KEYOU, said: “Our new KEYOU-inside H2 combustion technology is not only cost-efficient, robust and powerful, but it is also perfect for use with DEUTZ engines thanks to its high degree of scalability.”