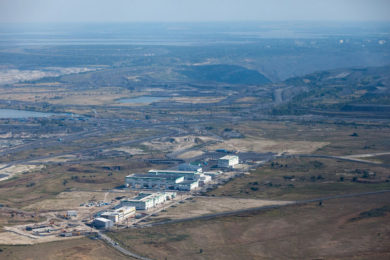 Ferrexpo says it has started using autonomous drilling as part of a push to increase mining and production efficiencies at its FYM iron ore operation in Ukraine.

Among $32 million of investment at the Ferrexpo Yeristovo Mining (FYM) operation in 2018 was a project to commence drill automation, the company confirmed in its delayed 2018 results today.

This investment is part of the company’s plan to hit its medium-term production target of 12 Mt/y, up from 10.6 Mt produced in 2018. Ferrexpo’s longer-term intention is to move to annual output of 20 Mt/y.

Outside of the automation development, Ferrexpo said: “The group has several projects under way which contribute to cost savings, efficiency improvements and enhanced health and safety standards.”

These include efficiency gains in shovel and dragline dig rates as well as a transition to 100% liquid emulsion blasting media. On the latter, the company said: “The transition to emulsion blasting media has resulted in increased rock fragmentation. This has improved excavator and shovel dig rates and reduces equipment wear and tear. It also yields power savings and reduced maintenance costs in the crushing plant.

“Other efficiency projects include the use of automatic pit drills, drones for surveys of the pit area and the commencement of the creation of a centralised mining control hub for all mining operations.”