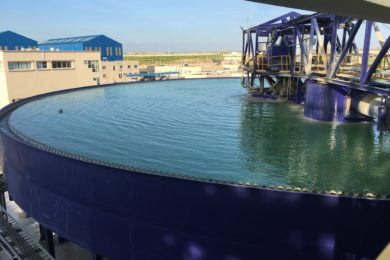 Rhosonics Slurry Density Meter (SDM) has proven its worth at the OCP Group’s Beni Amir phosphate mine and washing plant in Morocco, the Netherlands-based company said in its latest case study.

The leading phosphate miner recently evaluated nine months’ worth of test work at Beni Amir, which came out with favourable results.

OCP began operating the Beni Amir mine and washing plant in Morocco in 2015. Here, the phosphate ore at the washing plant goes through a wet treatment process to enrich the ore and increase its “Boone Phosphate of Line” content, according to Rhosonics.

Four pieces of the Rhosonics SDM, a non-nuclear density meter using sustainable ultrasonic technology, were installed at the Beni Amir plant in April 2018.

Rhosonics said: “The phosphate industry traditionally uses nuclear devices. Non-nuclear devices are still quite new to this industry and success stories are limited.”

By measuring the acoustic impedance of a slurry, the SDM calculates the density of the slurry in-line during the process, according to Rhosconics. The sensor is made of stainless steel and ceramic material. “Because of the new sensor material, the sensor has lots of better properties. By making use of ceramic material, the ultrasonic signal is more bright and powerful than before.”

Mohammed el Moudden, Chief Instrumentation of OCP Beni Amir, said: “We confirm a successful test of the SDM from April 2018 until now. A single calibration is sufficient for operation over three months. The team at the Beni Amir washing plant are satisfied with this technology.”

The Rhosonics SDMs were installed in the output of a cyclone, a mixing tank and two thickeners to improve the efficiency and fully use the production capacity of these separation processes, Rhosonics said.

Now, following this trial, the OCP Group has bought 13 additional non-nuclear Rhosonics SDMs to install at several locations at the washing plant, the company said.