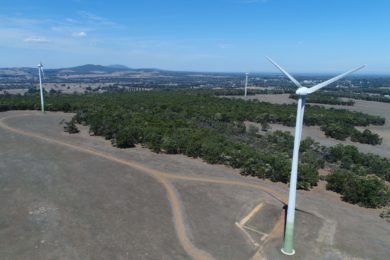 The project will use various innovations including a world first back-to-back microgrid inverter topology and refurbished Enercon wind turbines.

Due for commissioning in late 2019, AER will build, own and operate the project which includes a 2.5 MW wind farm, a 1MW solar farm and 2 MW/0.5 MWh battery energy storage system (BESS). The site is located in one of WA’s weakest sections of electricity network being 120 km from the Geraldton substation, at the northern extent of WA’s South-West Interconnected System.

Once commissioned, the project will be WA’s first hybrid wind, solar and battery project. The Australian Renewable Energy Agency (ARENA) will provide $3 million in funding to Advanced Energy Resources as part of its Advancing Renewables Program to commercially trial the back-to- back inverter technology. The technology will dramatically increase the penetration of renewable energy in microgrids located in weak, fringe of grid areas and increase reliability of supply for electricity users.

The BESS will allow up to 100% penetration of renewable energy and uninterrupted power supply capability during network outages and has been designed to provide on- demand network support if required by the network operator.
The use of refurbished turbines will be an Australian first. The project’s five Enercon E40 turbines were decommissioned in northern Germany as part of a wind farm repowering project.

AER decommissioned and transported the turbines and subsequently undertook an intensive refurbishment process of the wind turbines’ blades and mechanical and electrical components. AER will undertake and manage all recommissioning of the turbines including assembly, commissioning and ongoing operations and maintenance.

AER Managing Director Luca Castelli said: “This project showcases a number of innovative approaches toward delivering reliable, low cost renewable energy to large energy users. By thinking outside the box, and with ARENA’s support, we have been able to commercialise a new approach to energy storage and renewable energy project delivery which will change the way that renewable energy generators are delivered in weak, fringe of grid areas and by customers who are unable to commit to long term power purchase agreements.”