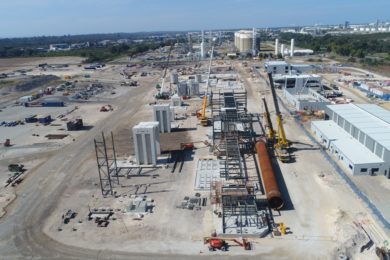 SIMPEC has continued to add to its structural, mechanical and piping (SMP), and electrical and instrumentation (E&I) work, in Western Australia, bolting on another A$5 million ($3.49 million) to its current list of contracts.

Having been awarded contracts totalling A$50 million in its 2019 financial year to end-June, the WestStar subsidiary has started its 2020 financial year strongly.

Although the company didn’t mention the specific contracts it had won extensions on, SIMPEC has previously been awarded work involving pyromet piping installation at the lithium hydroxide process plant (LHPP1) at Tianqi Lithium’s Kwinana project (pictured), in addition to installing electrical and communications systems at the Rio Tinto’s West Angelas iron ore mine construction camp.

The latest news come less than two weeks since SIMPEC registered A$2.5 million of extensions to previous contracts.

SIMPEC Managing Director, Mark Dimasi, said: “Having delivered a strong pipeline of contract awards over the past year, SIMPEC continues to consolidate its position and build its credentials on major projects.”

The company added: “SIMPEC continues to tender strongly for new work and expects outcomes from these tendering activities in due course.”