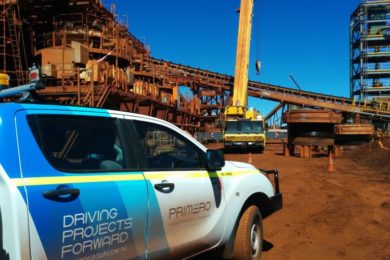 Primero Group has been conditionally awarded a multi-year build-own operate (BOO) and operations and maintenance (O&M) contract with Core Lithium at the Finniss project, near Darwin in the Northern Territory of Australia.

The agreement with Core, worth around A$100 million ($69.9 million) at Finniss, follows the company being named preferred EPC contractor status early this year. The contract also offers the opportunity for extension after the initial four-year term, Primero said.

Furthering Primero’s partnering contract model, the preferred contractor status has been extended to include conditional award of Primero’s first BOO contract for the crushing and screening circuit, the EPC and the complete O&M for the processing facility, Primero said.

Core’s development of Finniss is initially centred on production from the high-grade Grants deposit as an open-pit mining operation and construction of a 1 Mt/y dense media separation process plant to produce a 5% Li2O spodumene concentrate for export.

The prefeasibility study on the project envisaged a total capex of A$53.55 million and A$168 million in free cash generation over a period of 26 months based on a price of $649/t for its concentrate.

Primero Managing Director, Cameron Henry, said: “Primero is continuing to build a strong foundation and reputation for delivery. Current revenue run rates demonstrate our ability to concurrently manage growth and deliver on multiple projects, across various Australian and global jurisdictions. Our existing client relationships, and the repeat nature of large amounts of our business, provide a strong platform from which to drive and achieve our strategic goals.”