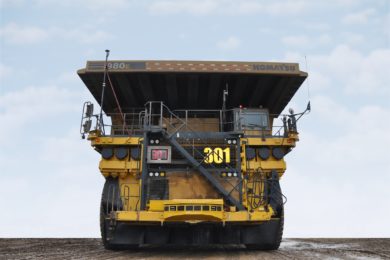 The big oil sands mining players in Alberta are quietly ramping up their autonomous truck programmes, to the point where in a few years time they will not be far behind Australia’s Pilbara in terms of numbers of autonomous trucks running and will certainly lead the world in terms of the largest ultraclass autonomous trucks market. Earlier this year, Imperial Oil’s Kearl mine autonomous haul truck program received regulatory approval from Alberta Occupational Health and Safety, granting Imperial the ability to automate its entire fleet. Plans include expanding the scope of the ongoing pilot to about 20 trucks through 2020, before making a final decision on full automation. The project is expected to drive a significant improvement in safety performance and operating cost. Notably this project involves autonomous 797F 363 t haul trucks for the first time. Caterpillar have already told IM that it offers an autonomy retrofit kit for the 797F and that its “new” autonomous 797Fs will be available from the factory in September 2019 (797F T2 CMD and 797F T4 CMD).

CNRL has an autonomous truck project running at its Jackpine operation. Chief Operating Officer, Oilsands Scott Stauth told an investor group in December 2018, reported in The Canadian Press: “Assuming we are satisfied with the results of the three-truck trial at Jackpine, we would convert all trucks at Jackpine to autonomous by 2022, followed by Muskeg River Mine and Horizon in 2025,” Stauth said. The conversion would initially cost the company $275 to $325 million, but cut its operating costs by C$0.30 to C$0.50 per barrel once complete. CNRL has elsewhere said that it sees a longer term opportunity compared to peers due to its current top tier haul truck utilisation of ~90%. CNRL operates 18 trucks at Jackpine, and a total of 140 across its three mines, which again are all ultraclass haulers – and again mainly Caterpillar 797 variants such as B and F models.

In early 2018, Suncor, the first adopter in the oil sands announced it was proceeding with the phased implementation of autonomous haulage systems (AHS) at company-operated mines, which in its case involves Komatsu trucks – both 930E-AT and 980E-AT models, supplied and serviced by dealer SMS Equipment. In its 2019 Sustainability Report, Suncor says it now has AHS-enabled Komatsu trucks running at the North Steepbank site and notably, AHS implementation has now begun at the Fort Hills minesite in 2019, ramping up through 2020. Suncor adds: “Over the next five years, we expect to deploy more than 150 autonomous haul trucks in the full program, which will be one of the largest investments in autonomous vehicles in the world. Autonomous haul trucks operate using GPS, wireless communication and perceptive technologies. The trucks operate predictably and employ a suite of safety features like prescribed route mapping and obstacle detection systems. They also reduce interaction between people and equipment which decreases incident rates and injury potential.”

Trucks used to support Suncor’s operations are designed to operate in either an autonomous or manual mode. While Suncor was the first company in Canada to deploy the equipment, it points out that the technology is used commercially in mining environments across Australia, the United States and Chile. “Evaluations have shown the technology offers many advantages over existing truck and shovel operations, including enhanced safety performance, better operating efficiency and lower operating costs. The implementation of AHS will change roles and required skill sets for some employees at Suncor’s operations over time. A staged approach to deployment will allow the company to deliberately focus on each mining area and apply lessons from one to the next.”