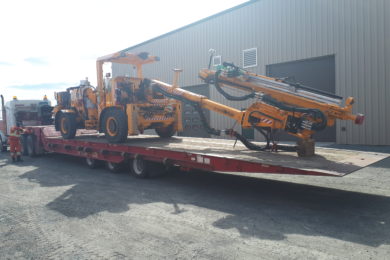 The MacLean Blockholer is a “versatile warrior”, according to Viv Bhatt, Product Manager – Ore Flow, Drill & Blast at MacLean Engineering.

“We call it a Blockholer, you may know it as a secondary reduction drill, but either way it comes down to the same thing…a critical tool for making sure the ore flows in underground mining,” Bhatt said, adding that there are more than 125 success stories from across the globe that attest to this.

MacLean’s battery-electric fleet at Borden, billed by its owners as being the world’s first all-electric mine upon start-up (expected later this year), has been steadily growing over the past year or so. The company said back in March that the delivery to Borden of the Blockholer would see its fleet hit 15 units, comprised of six bolters and nine utility vehicles.

On the Blockholer specifically, Bhatt said: “Whether it’s a low hang-up in a drawpoint, or oversize rock on the ground that’s too large for scoops to handle and too disruptive to get rid of with concussion blasting, it’s your secondary reduction rig that solves the problem and ensures that production isn’t held up.

“And when it’s not tasked with this mission, it can be put to use for ancillary drilling for mine services.”

Bhatt listed off five reasons why the self-contained blockholer drill could become the workhorse of hard-rock underground mining fleets: