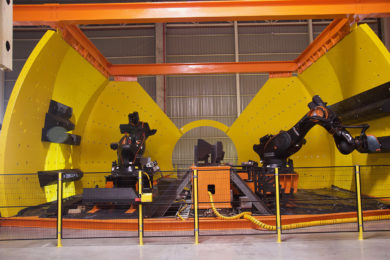 MIRS has launched an innovative robotic solution to automate the process of changing wear liners in mills without any human intervention. The company said a unique team had responded to one of the greatest technological challenges of the mining industry, by executing the change of liners “at a speed never before achieved, with high standards of quality, efficiency and safety.”

MIRS launched the revolutionary robotic solution, fully developed in Chile, for the lining of SAG and ball mills, at an international event that took place on September 5 at the industrial testing facilities owned by the company, a subsidiary of the HighService Corp company, in San Bernardo.

Major players in the mining sector, led by the Minister of Mining, Baldo Prokurica, and more than 40 executives from mining and engineering companies in Chile and Peru, had the opportunity to witness a full-scale model of a 36 in SAG mill , and the operation of the EMMR (External Mill Maintenance Robot), the world’s first fully automated system that performs this operation autonomously and without human intervention.

“The launch confirms not only the progress and the high level of technological development achieved by MIRS worldwide, but also represents the greatest advance of recent times in automation for the process of changing mill liners in the mining industry, in safety and quality terms.”

“Mining is challenged to change the way we extract and produce metals and minerals. It is now when the industry has the possibility to transform its processes and resume its productivity and competitiveness indices, and that is why the incorporation of technologies and innovations are totally necessary to face it, in a process where robotics plays a very important role,” the President and CEO of HighService Corp, Hugo Salamanca, told the audience.

The process of changing coatings is a task that, in the case of SAG mills, must be carried out every three or six months and, in the case of ball mills, every 8 to 18 months, depending on the hardness of the minerals being milled. Until now, the only way to execute it was through manual work, performed by a team inside and outside the mill with the support of manual hydraulic machines, in a high-risk environment that is the main cause of the mill’s lack of availability of a concentrator plant. “Minimising the time to execute the lining of the mill is a condition that the industry has always demanded,” says Igor Elías, Manager of the Commercial Area of ​​MIRS Mill Reline. “This innovation in plant maintenance reduces maintenance times and increases worker safety,” he adds.

To meet the requirements of its customers, the MIRS automated system increases the quality, safety and speed of the operation by replacing the workforce with the collaborative action of robots up to 6 t, which operate in parallel at a speed that reaches up to 2 m per second, reducing the total operation time by approximately 40%. “A 100-hour detention with the conventional system will decrease to 60 hours with the use of EMMR and IMMR,” says Igor Elías.

This solution presented by MIRS performs all the high impact work that involves the change of liners, but fully automated: removing nuts and washers, removing bolts, cleaning and lubricating bolt threads, installing new bolts, simultaneously tightening two nuts, cleaning of bushings and nuts and mill standardisation for operation, amongst others.

During the launch, a demonstration was made of how complementary technologies for EMMR work, such as the IMMR automatic manipulator (Internal Mill Maintenance Robot), the first fully automatic prototype that performs the change of coatings in the internal part of the mill. Designed to operate in parallel with the EMMR, it automates the extraction of linings and bolts from the interior, as well as its subsequent installation, and will perform other activities such as automatic cutting by flame cutting and high pressure washing.

“Acting together, the EMMR and IMMR systems will fully automate the process of changing internal and external linings of SAG and ball mills in
the absolute absence of human intervention in the mill,” says Igor Elías.

Additionally, both systems have the advantage of minimising the cost of implementation, since they are installed and uninstalled, which requires a minimum adaptation of the plant design and without requiring changes or adjustments, since they incorporate multipurpose tools that are compatible with traditional used inside the mill, even if they are not robotic.

Both solutions have the new MIRS Bolt-Driven technology, which allows to install and replace the linings without dropping them in the mill, allowing a free and continuous flow of materials to and from it, and with MIRS Power Strike, which allows to operate the robotic replacement of coatings with different types of screwing systems.

This system allows adding a series of autonomous equipment and platforms, depending on the conditions of the plant. Thus, for example, the transit of new and worn liners is automated from the storage yard to the mill and vice versa, without requiring the support of vehicles such as forklifts. 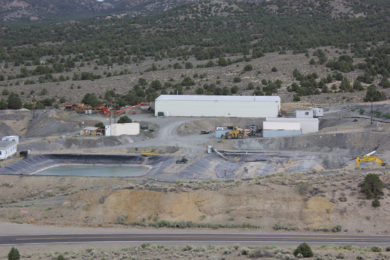