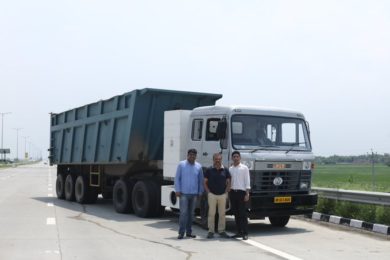 Infraprime Logistics Technologies (IPLT) says India’s first all-electric, heavy-duty 60-t truck has had its initial commercial run, with a launch for the country’s construction and mining sectors scheduled for next year, according to local reports.

IPLT says its electric truck, the IPLT Rhino 5536, is the first of its kind to be integrated and deployed in India.

Some of its distinguishing features include the transmission based electric drivetrain, proprietary vehicle control software for improved mileage in material logistics and a battery pack “designed for optimal performance in local conditions”.

The latter has an in-built air-conditioned secondary cooling system to maintain the temperature around each cell at below 35° C even when ambient temperature climbs above 50° C, according to the company. IPLT said the 265 kWh battery pack weighs in at more than 2 t, making it one of the largest packs in use in India, and a 160-kW “twin gun fast charging” system is used to recharge it. This system, it says, could also offer a “blueprint for a pan-India network” of charging devices, it said.