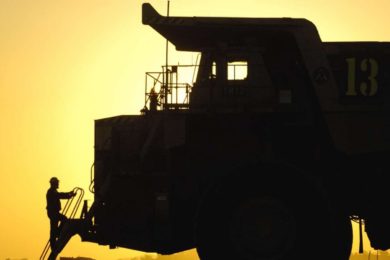 Chinese mining truck manufacturer China Space Sanjiang Group (CSSG) is the latest OEM in the country to develop an autonomous model, joining Inner Mongolia North Hauler’s NTE120AT, which is being trialled at an iron ore mining operation. Amongst the other OEMs, XCMG has an active truck automation program (stated to IM in a recent interview and thought to include the XDE110 and other models), while XEMC told IM at a meeting in Xiangtan, China it has the intention to launch an autonomous truck in 2020.

According to China’s news agency Xinhua, itself quoting Science and Technology Daily, the official newspaper of the Ministry of Science and Technology, the new truck was jointly developed by the China Space Sanjiang Group and Vipioneers and was displayed last week at the 2019 World Conference on the VR Industry in Nanchang, in east China’s Jiangxi Province.

The truck is described as a “5G intelligent unmanned mining truck” and measures 10.2 m long, 5.4 m wide and is 5 m tall, and has a carrying capacity of 110 t, following the size class route for autonomy that others in China seem to be taking; which is interesting as autonomous mining truck automation in the rest of the world is focussed on larger truck sizes. This partly reflects the fact that on average, China has relatively few mines using ultraclass mining haulers.

The truck can plan its mission and route for itself, load and unload automatically, and drive by itself, the report said. Unmanned mining trucks are expected to improve mining safety and production efficiency. Compared with other unmanned vehicles, “mining needs trucks to cope with tough road conditions with unpredictable obstacles and no clear guideposts,” said the newspaper.