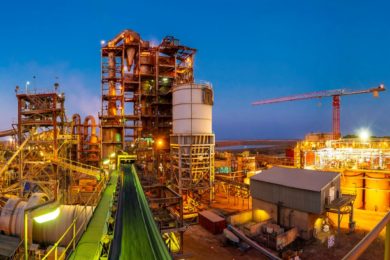 Work will commence in the current quarter and once fully operational, the new power plant is expected to reduce Syama’s power costs by approximately 40%. The proposed timeline and associated power saving outcomes are consistent with the assumptions contained in the Syama Definitive Feasibility Study Update.

Managing Director and CEO, John Welborn, was pleased that the company had secured an innovative low-cost power solution for Syama: “Identifying and adopting world class technologies to improve our operations is fundamental to achieving Resolute’s ambitions. We are delighted to be partnering with Aggreko in delivering a lower cost and more environmentally friendly power solution for our Syama gold mine. The new Syama hybrid power solution will lower our power costs at Syama by approximately 40% while significantly reducing our carbon emissions. Having worked together for several years, we know Aggreko is the right partner to support us as we integrate renewable energy into our Syama operation.”

The new hybrid modular power station will deliver cost effective, environmentally friendly, capital efficient power and long-term electricity cost savings of up to 40% (relative to Syama’s existing power supply) while reducing carbon emissions by approximately 20%. The new plant will be delivered in two stages. Stage 1 is expected to be completed in 2020 and will comprise the installation of three new thermal energy Modular Block generators and a battery storage system. The new Modular Block units will be fuelled using a refined heavy fuel oil (IFO 180) and will be installed alongside the existing Syama thermal power plant to allow seamless transition to the new solution.

Replacing existing diesel thermal generation at Syama with modern intermediate fuel oil thermal generation is expected to increase efficiency by approximately 30%. The new Modular Block units will provide 30 megawatts (MW) of power and will incorporate an additional 10MW Y-cube battery storage system. The battery will provide spinning reserve displacement. The second stage will consist of the installation of an additional 10MW Modular Block in 2022 and the construction of a 20MW solar power system. Once the solar power system is installed, the 10MW battery storage system will also manage the solar power contribution to the power systemand smooth out fluctuations in solar power output to facilitate integration into the hybrid system.

The solar array is planned to be constructed on the surface of the existing Syama Tailings Storage Facility (TSF) thereby maximising positive environmental outcomes and augmenting Resolute’s rehabilitation program. The timeline on commencement of stage 2 will depend on the decommissioning of the existing TSF and is expected to be completed, at the latest, by 2023. The site infrastructure layout of the new hybrid power plant will include space to accommodate an additional four 10MW Modular Block units, enabling the mine to add additional power capacity if needed to support future growth.

Resolute currently operates a 28MW diesel generated power station at Syama. The Syama power station was originally established by BHP in the 1980s and contains a fleet of diesel generators which have progressively expanded to meet operational requirements. Current configuration consists of two 5MW Allen units and a series of smaller Caterpillar and Cummins units. Resolute has been examining opportunities to reduce Syama’s reliance on diesel, and reduce costs, for many years. The current cost to generate power at Syama ranges from $0.20/kWh to $0.24/kWh depending on prevailing diesel fuel prices. Prior to 2016, Resolute had been working with the Mali Government on a possible high voltage grid connection between the City of Sikasso and Syama. The Syama Grid Connection Project (SGCP) contemplated the construction of a 225kV electrical transmission line to provide the mine with reliable and lower cost power. The SGCP was suspended in June 2016 following a comprehensive review of the project and an assessment of possible energy alternatives.

During 2018, Resolute conducted an international expression of interest tender process seeking proposals for an Independent Power Producer (IPP) model, whereby a third party would be responsible for construction and operation of new power generation facilities. Resolute entered into a Joint Development Agreement with Ignite Energy Projects Pty Ltd (Ignite) to further explore the hybrid power solution for Syama. Following detailed due diligence and an analysis of likely power costs under the proposed IPP model, the Ignite agreement was terminated by the company in the June 2019 Quarter. Since termination of the Ignite agreement, Resolute has continued to investigate alternative opportunities to achieve a low cost power solution for Syama culminating in the partnership with Aggreko on a hybrid power plant.

Resolute’s partnership with Aggreko will achieve the objective of delivering cost effective, environmentally friendly, capital efficient power that can deliver long term electricity cost savings consistent with the Syama DFS Update while reducing carbon emissions and providing scalable solutions to expected future power requirements. Resolute has signed a Heads of Terms Agreement with Aggreko for the development of the new Syama hybrid power station. The Heads of Terms set out the critical risk allocation and practical requirements which are required to be agreed between Resolute and Aggreko. A Power Supply Agreement (PSA) is expected to be entered into by the parties in due course which will regulate the timing and performance obligations and other key terms for the supply of energy for Syama. Aggreko is a highly experienced provider of power solutions. Aggreko is currently building a hybrid power solution at the Gold Fields Ltd’s Granny Smith mine in Western Australia which will comprise 8MW of solar power generation, as well as a 2MW/1MW h battery energy storage system integrated with 24MW of natural gas thermal generation.

The power resources will be integrated and managed by Aggreko’s control software platform, maintaining full system availability and optimising the thermal assets. Aggreko’s team is already familiar with Syama, having provided rental power solutions at the site since 2015. Since August 2019, Aggreko rental units have been the primary source of power at the mine. The thermal element of the project is expected to be implemented in partnership with Wärtsilä Corporation (Wärtsilä), using its new Modular Block technology and design. The project will mark one of Wärtsilä’s first sales of this pioneering new product, and Aggreko’s first contract to deliver it.