An independent Bougainville could mean Panguna’s rebirth, a mine with a Grasberg scale potential 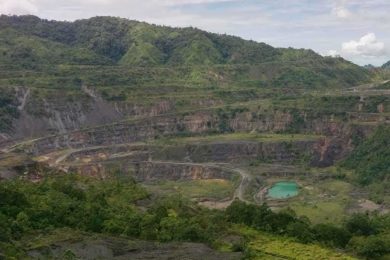 Talk to any Australasian mining manager “over a certain age” and it is likely they or one of their compatriots from mining school spent some halcyon days working at the Panguna copper-gold mine in Bougainville, which in its heyday was one of the largest mines in the world, and on paper still is in terms of potential. Tales of high salaries, escapades during time off in Rabaul…you get the picture. After the deposit was discovered in the 1960s, the open pit mine in Panguna was opened by in 1972 by Bougainville Copper Ltd, a subsidiary of Rio Tinto, through its Melbourne arm Conzinc Rio Tinto, opened in 1972, with Rio only selling its BCL stake in 2016.

Back to the 1970s and Panguna soon provided 44% of Papua New Guinea’s export income and in the 17 years prior to 1989, the mine produced concentrate containing 3 Mt of copper, 306 t of gold and 784 t of silver. But it all came to an end in 1989 when production abruptly halted following separatist militant activity by the Bougainville Revolutionary Army fighting against the PNG army, mainly over issues caused by a large influx of PNG migrants that did not sit well with Bougainvillians.

And much of the equipment is still there, overgrown by tropical jungle and unused. Bougainville Copper also trained some 12,000 employees, including approximately 1,000 completing full trade apprenticeships and some 400 completing graduate and post-graduate studies that resulted in considerable progress in the localisation of the company’s employees and significantly added to the number of skilled workers elsewhere in the country’s workforce.

On 1 July 2016, BCL’s major shareholder, Rio Tinto, transferred its 53.8% shareholding for distribution to the Autonomous Bougainville Government, for the benefit of Panguna landowners and the people of Bougainville, and to the Independent State of Papua New Guinea.

Fast forward to December 2019 and an independence vote by the people of Bougainville (98% in favour) means the likelihood of Panguna mine returning to production, and joining the likes of Grasberg, Lihir, Porgera and OK Tedi in the region’s hugely important mining industry, have just got much higher. The referendum was approved by the Papua New Guinea government, but the result is non-binding. That said, it puts a lot of international pressure on PNG to grant Bougainville independence. The islands have a population of around 300,000, and 206,731 people enrolled to vote in the referendum.

Panguna is the single obvious route to a vast and relatively quick revenue source for any new sovereign nation of Bougainville. BCL is already majority owned by the people of PNG and Bougainville. And it would come at a good time mining wise, as it would be in a position to use the latest technologies available to maximise productivity and efficiency from automation to digitalisation, though this would have to be balanced with supplying large numbers of badly needed skilled jobs in the country. And of course the mine could support a vast industry of other businesses that come with mining from catering to cleaning to logistics to accommodation, which all where possible should be locally owned.

BCL’s task has been made more challenging with a decision in January 2018 by the Autonomous Bougainville Government not to grant an extension of the company’s exploration licence (EL1) – which Bougainville Copper believes was legally and procedurally flawed. This decision is subject to an ongoing Judicial Review in the PNG National Court.

Regardless, the company believes BCL presents the best value proposition to redevelop Panguna – particularly given the strong majority ownership stake that the people of PNG and Bougainville have in the company – and continues to work towards this eventuality.