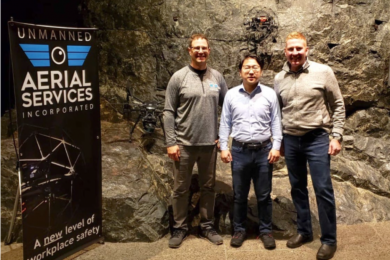 Established in 2017, UAS inc is an inspection service provider for indoor industrial confined spaces and underground mine locations. It counts among its clients some of the world’s leading mining companies including Vale, Newmont Goldcorp, Barrick Gold, and Glencore.

The agreement will see Terra Drone Mining provide cutting-edge unmanned mapping and inspection services to underground mines across the world, according to Terra Drone, with the investment allowing the newly-formed company to expand UAS Inc’s business beyond North America into South/Central America, South Africa, Central Asia, Russia, and Australia.

Terra Drone said: “Accidents in underground mines have remained a serious issue around the world throughout the last century. Workers not only suffer from health issues caused by working in dark and narrow tunnels day after day, but they are also prone to accidents caused by falling material, flooding, as well as underground fires and explosions.

“The risk of such incidents can be minimised by using unmanned inspection solutions, aka drones.”

Terra Drone uses a mapping technology called Simultaneous Localisation and Mapping (SLAM) to create highly detailed maps of underground areas. Since a drone can reach areas that are not easily or safely accessible to humans or traditional CMS scanners, mine operators can use drones to obtain 3D models of the mines, and prevent workers from entering hazardous locations.

Terra Drone concluded: “Terra Drone Mining will be able to leverage both this advanced UAV technology as well as the underground mining inspection know-how that UAS Inc has cultivated over time to create a robust local service network.”