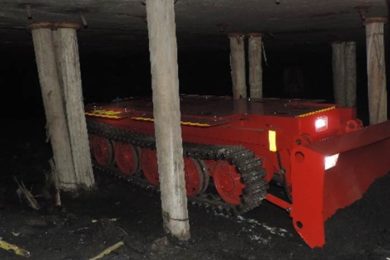 Another highlight of Anglo American Platinum’s just released 2019 report was the revelation that electric narrow reef mechanised equipment is set for trials at its Tumela 15E underground platinum mine, part of the Amandelbult Complex in Limpopo province. These new narrow reef machines use lithium-ion batteries which can achieve up to 2,000 charging cycles. These units will replace the diesel XLP units in the future.

IM understands that Tumela will initially use the existing diesel refurbished XLP fleet for the first phase of the 15E work. The current XLP fleet is Epiroc equipment that is diesel-powered and the intention is to progressively phase the units out with electric DOK-ING Narrow Reef Equipment (NRE), which will be in its final production trial stage, later in 2020. If the NRE equipment performs to expectations, the mine will then utilise the NRE units as it opens up the scale of the 15E project.

The potential narrow reef equipment benefits are numerous – foremost safety as remote-controlled equipment keeps workers away from the mine face. It allows for lower panel widths (0.9-1.7 m), resulting in less dilution of ore with waste as well as faster extraction and improved labour efficiencies, plus a higher skill level of employees.

The NRE equipment story dates back to 2010. Anglo American Platinum approached DOK-ING as it was looking for another generation of electric ultra low profile machines with more versatility that could handle a range of stoping widths from 0.9 to 1.7 m. The machines consist of one common (interchangeable) prime mover for the dozer and sweeper and another common prime mover for the drill rig and bolter. So far the trial fleet has been built by DOK-ING Africa at its facilities in Germiston, South Africa.

The machines have sensors and cameras allowing the production and production data to be monitored in real time from the surface, but ultimately it will be possible to also operate them from surface. The machines are also interoperable with the mine’s main fleet management.