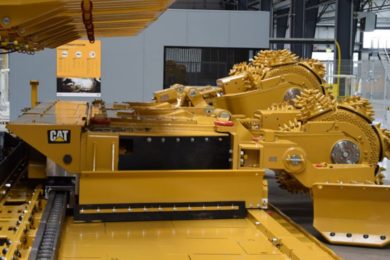 In what will be a huge blow for some of the most historic mining technology & equipment manufacturing locations in Germany and indeed the world, Caterpillar Inc. today announced it is “exploring strategic alternatives for certain mining products” adding “in order to remove structural cost in the business and improve competitiveness, the company is contemplating several actions.”

First off, Caterpillar is contemplating the restructuring of the Longwall business and closure of the Luenen and Wuppertal, Germany, facilities with the consolidation of production into other locations. These are historic mining equipment factories – as an example the coal mining plow (plough) was invented and refined by Wilhelm Löbbe, Chief Engineer at Westfalia Luenen (a predecessor company of Caterpillar) back in 1947 in an attempt to modernise and mechanise underground coal mining. Löbbe also invented the PANZER-Förderer® or armoured face conveyor, which was successfully installed underground for the first time in Poland in 1942.

The Luenen factory went on to deliver some of the most productive systems in coal mining history. In March 2010, Polish mine operator Lubelski Węgiel Bogdanka SA commissioned the automated GH1600 plow — designed for high productivity in very hard coal and the system of choice for seams up to 2.3 m — at its Bogdanka mine. The system features 2 x 210/630 kW (two-speed motors) for the plow system and 2 x 800 kW for the AFC system. Within months of delivery, the new longwall had far exceeded the production target of 10,000 t per day specified in the invitation to tender — and even set a new European record for plow faces.

Prior to acquisition by Caterpillar, the Luenen facility had been part of Deutsche Bergbau-Technik GmbH (DBT), still a revered name in coal mining, which was then taken over by Bucyrus in 2007 to become Bucyrus DBT, before finally joining Caterpillar in 2010. Already under DBT the site had the capacity to deliver 24 longwall coal shearers per year. It was also DBT in Luenen that made many strides in hard rock cutting – that eventually led to the Caterpillar hard rock longwall systems for tabular low seam hard rock known as Rock Straight; the Rock Flow system for block cave mass rock movement as well as the Rock Header hard rock development machine, all of which now seem destined for the history books.

Sadly, Caterpillar is also contemplating the restructuring of the Hydraulic Mining Shovel (HMS) business and closure of the Dortmund, Germany, facility with the consolidation of production into other locations. Again, this would be a sad end to a huge heritage in the city – it was back in 1893 that O&K, Orenstein & Koppel, opened the Dortmund factory that originally produced steam powered excavators. O&K was bought by Terex in 1998 then Terex O&K joined Bucyrus in 2009 just prior to the Caterpillar buyout in 2010. Hydraulic shovels made by O&K including the RH120, RH340 and RH400 were highly regarded throughout the mining world, even before Caterpillar bought the business and refined the models into its own 6030, 6060 and 6090 machines.

Caterpillar said it and its dealers remain committed to their customers, closing with the statement: “If the decisions are finalised, the Longwall and HMS businesses will be better positioned for future competitiveness.”