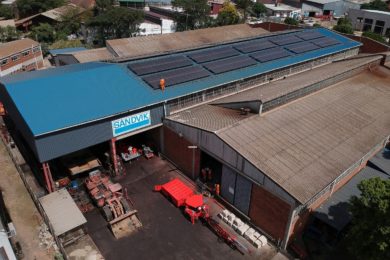 Solar power is energising Sandvik Mining and Rock Technology’s facility in Zimbabwe, with the mining OEM saving around 400 t/y of carbon dioxide emissions, it says.

The Harare-based operation, which focuses mainly on the remanufacture of Sandvik trucks, loaders, drills and bolters, kicked off its solar power journey in 2017 with an 18-month Phase One project. This included strengthening the roof of the remanufacture facility to accommodate the weight of some 400 solar panels.

Using local contractors and expertise, the project was soon generating 50 kW of power to the facility. In Phase Two, another 50 kW of capacity was added, with the installation now supplying about 75% of requirements. Plans are also in place to provide 100% of demand with another 30-50 kW of capacity.

Among new Sandvik sustainability goals outlined in 2019 across the group is an aim to halve the CO2 foot print from the company’s own production by 2030.

Ian Bagshaw, Territory Manager Zimboz – Southern Africa at Sandvik Mining and Rock Technology, said: “This takes our Harare facility to the next level in terms of technology and sustainability.”

In an unusual design, the system operates with no battery storage, consuming the energy as it is generated. This substantially reduced the cost outlay for the project, enabling a payback period of just nine years, according to Sandvik.

The solar journey has not been limited to the facility’s buildings. Over the past year, it has also been extended to the homes of employees. In a pilot project, standalone domestic solar power systems were designed, tested and installed. The combined impact, so far, amounts to about 35 kW of renewable energy.

“We will provide loans to staff members wanting to install solar power at home, empowering them to further reduce climate impact,” Bagshaw said. “We will roll out this program in 2020 through an offer to all staff, and we expect an enthusiastic uptake.”

He estimates the company’s domestic solar program could soon produce a total of about 300 kW of renewable energy.

Bagshaw said the Harare workshop is fully accredited and works to OEM standards. “This high quality of workmanship allows us to provide full warranties on the machines we strip down and rebuild,” he said.

The facility is also an important training resource for Zimbabwe, developing diesel plant fitters, millwrights and electricians, according to Sandvik. It accommodates about 40 apprentices in training at any one time; currently around 30% of these are women. The facility also provides work-related learning to other companies’ employees in the region and is a government accredited trade testing centre, Sandvik says.