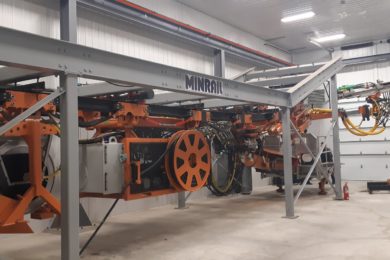 SAMS, similar to Alimak mining, according to Ascot, is a new technology system focused on the mechanisation of ore extraction developed by Quebec-based Minrail. The system cropped up in the “value enhancement opportunities” section of Ascot’s study.

Ahead of that, the study, led by Sacre-Davey Engineering Inc, showed off some encouraging results.

Benefitting from an existing processing facility at the Premier gold project, the study envisaged using a SAG and ball milling flowsheet followed by the refurbished carbon-in-leach circuit. Over the mine life, the plant will operate 365 d/y to produce gold doré with an overall plant availability of 92% and an average throughput of 2,500 t/d, according to Ascot. In the latter part of year three, ore from the Red Mountain project will be introduced to the existing mill facility, it said.

While the economics and technical elements of the feasibility study stacked up, the company also laid out some potential “value enhancement opportunities” beyond the scope of the study.

This is where SAMS and Minrail came in.

Ascot said there was potential for reducing mining dilution and development by undertaking further studies and testing of SAMS.

“SAMS is similar to Alimak mining but at a low angle, with a central drive and long holes drilling laterally, offering the potential to significantly reduce dilution, operating costs and mine capital development costs,” Ascot said.

According to the company, the method is currently being tested by Minrail at Eldorado Gold’s Lamaque mine in Val D’or, Quebec.

A press release from Minrail posted around a year ago said Lamaque had ordered a “group of mining equipment” to undertake underground test work using SAMS at the operation.

“After an extensive review of all currently available underground mining methods and available technologies that are suited to narrow, shallow dipping deposits, Eldorado has perceived the great potential of Minrail’s technology to complement its mine development plans using SAMS, which incorporates critical mining innovations focused on safety, productivity and flexibility,” Minrail said in the statement.

The resource model at Lamaque encompasses several shallow dipping lenses that are believed to be amenable to using SAMS, Minrail added.

This test work was due to take place last year, according to the release.

Yet, in January, the Quebec government announced it would provide a C$150,000 grant to Minrail to complete a prototype SAMS system that would be installed at Lamaque.