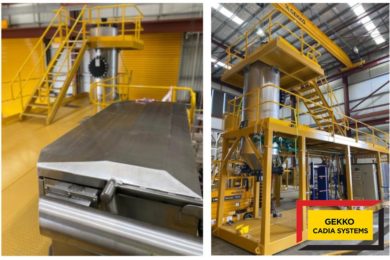 Gekko Systems and Cadia Systems, following the signing of a partnership and collaboration agreement in October, say they are working together on their first joint gold elution circuit.

The two companies are in the process of manufacturing the circuit for Manuka Resources’ Mt Boppy gold project in New South Wales, Australia.

When the Gekko and Cadia agreement was signed back in 2019, the two said the partnership was expected to feature a new Gekko-Cadia brand, which represented an important industry collaboration between Cadia’s engineering capabilities and technical knowledge in areas such as carbon desorption, regeneration and gold room systems; and Gekko’s modular plant and package offerings.

Gekko’s Manager Sales & Operations for Australasia & EMEA, Tim Bell, said: “We see this as a great opportunity to add further value to the gold sector through the provision of high-quality packaged elution circuits and a natural fit with our already vast gold processing expertise.”

Manuka Resources says the Wonawinta processing plant flowsheet at Mt Boppy has an 1,800 kW primary ball mill, 400 kW secondary ball mill, six leach tanks (poured plinths for two more), a carbon based elution circuit with Merrill-type zinc precipitation, filter press (for silver) and a new Gekko elution circuit for gold doré production. It added that the plant had recently been refurbished at a cost of some A$5 million ($3.2 million).