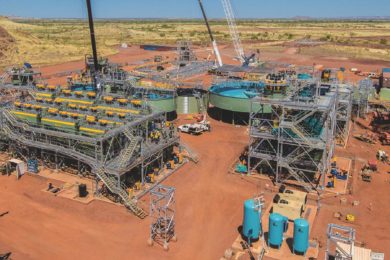 Civmec Ltd has added another work package on a major iron ore development to its books, with Rio Tinto awarding it a contract to help further develop its Mesa A operational hub in the Robe Valley of Western Australia.

The package comprises the supply, fabrication, modularisation, transportation to site, erection, modification, installation, and commissioning of structural, mechanical, piping, electrical and instrumentation, and communication work for the Mesa A Wet Plant, it says. Components include screening, surge bin and scrubbing facilities and associated conveyor systems, transfer towers, sub stations and all piping and cabling, including trenching for underground services.

Rio Tinto’s Robe Valley Sustaining iron ore project, in the Pilbara region, includes the development of three new mining deposits and the construction of supporting infrastructure required to continue operations of the two existing operational hubs at Mesa A and Mesa J. The project is part of the company’s plans to sustain production capacity at its Robe River joint venture.

Civmec’s contract award follows similar agreements with Fortescue Metals Group on the Eliwana project and a contract to fabricate and modularise key components for BHP’s South Flank project, both of which are also in the Pilbara.

Civmec Chief Executive Officer, Patrick Tallon, said: “Rio Tinto has always been a good client for us and we have a long history of supporting the safe, high quality and timely delivery of their projects in Western Australia and Queensland, across construction, manufacturing and maintenance.”

Fabrication, to be undertaken at the group’s Henderson facility, will employ around 200 people and will commence in the coming weeks, Civmec said. The on-site structural, mechanical and piping component will require some 240 people to mobilise to site at the peak of the project in the latter part of this year, while the electrical discipline will require some 100 people in early 2021.

Civmec’s relationship with Rio Tinto is not limited to new development projects, the company says. It extends across other Rio Tinto sites, with the group’s maintenance division continually supplying services to its operations.

The award of this significant construction project, combined with recent work orders for the maintenance division from Rio Tinto, have a combined value of circa-A$165 million ($106 million), with the group’s order book now standing at around A$895 million, Civmec said.