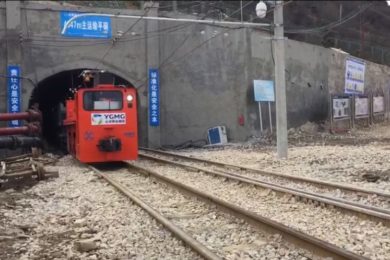 China like in other mining equipment and technology areas is a complex actor in the world of underground rail. It has its own domestic players in locomotive supply, including XEMC and Hunan Yutong which can both supply diesel, battery, battery-trolley and trolley solutions of more or less any kind and any size that would be used in mining. Both of these companies are based in Xiangtan which is a centre of electric drive technology in China and both make their own electric motors and have both built lithium battery locos already for the mining market. This includes lithium battery locos developed as part of a collaboration between XEMC, Hunan Yutong and Chinese rail equipment giant CRRC which also has a large division supplying diesel and electric mining rail solutions. The new locomotives included a 2.5 t, 5 t and 8 t model all with lithium batteries. These have been delivered to mining companies including several operations of Shandong Gold in Shandong Province as well as in Inner Mongolia. A 15 t loco with lithium battery has also been designed by Hunan Yutong for a copper mine in Zambia. XEMC has also developed its own lithium battery locos for several projects.

Aside from these OEMs there are two major engineering companies that are leading the developed of autonomous mining rail both in China and in some overseas projects, namely China ENFI, part of MCC, and Beijing Soly Technology which is also one of China’s major suppliers of FMS solutions to open pit mines and is ultimately part of iron and steel group Shougang. A third group, China Nerin Engineering, is also involved in this market.

China ENFI went on to sign a contract in 2016 with NFCA Mining for the Chambishi Main and West Ore Body 500m unmanned electric locomotive transportation project in Zambia. This was the first time Chinese unmanned electric locomotive control technology was put into practice in an overseas project. As such, China ENFI said it would “rely on its core specialised techniques to provide assistance for advancing quality and efficiency, boost supply side structural reform, further strengthen its leadership in the industry and improve its international reputation and brand value.”

Beijing Soly in 2016 won the bidding for the EPC contract for a driverless rail haulage system at Yunnan Copper’s Pulang (sometimes written Pulong) mine, which was commissioned just over a year later. Notable elements include the 20 m³ wagons which are some of the largest volume wagons in underground rail haulage in the world and saw the bottom-dump unloading method is used in China for the first time. Interestingly the wagons were supplied by South Africa’s Galison including 40 underground wagons and two tipping stations. The tipping solution is able to discharge about 200,000 t/mth of rock, with a single train load of 400 t being discharged in an average of two minutes, significantly surpassing the local industry average of 30 minutes. The system uses an XEG 65 t electric locomotive from XEMC, itself one of the biggest tonnage locomotives in underground rail. The whole process is fully automatically operated, other than the remote controlled loading process. Since then, Beijing Soly has successfully signed and implemented driverless rail haulage system at Xigou Mining Co Ltd of Jiuquan Iron & Steel Group and the Zhongguan Iron Mine of Hebei Iron & Steel Group (HBIS). In 2019 it completed commissioning of the system on the 3100 level of Xigou Mining.

Additional Beiing Soly projects include the driverless underground rail haulage systems in the Zijinshan Auricupride mine of Zijin Group, the Huize lead-zinc mine of ChiHong Zn&Ge Co Ltd, Sanshandao Gold Mine of Shandong Gold Group and at Tonggang Banshi Mining Company. Within its parent company Shougang Group projects include a system at the huge new 22 Mt/y Macheng iron mine of Shougang Group plus two systems at Xingshan iron mine, a remote-controlled system at -180 m level and an automated system at -330 m level. Macheng is an interesting project, as North Bay, Ontario, Canada-based Nordic Minesteel Technologies Inc has the mining cars contract for the up to ten trains that will be used, with the first train of 12 NMT mining cars of 20 m3, two loading chutes and one unload station to be built in Canada and the rest of the contract to be completed in China.

Elsewhere, China Nerin announced in June 2019 that it had successfully commissioned an unmanned electric locomotive haulage project in the Ninghua Xingluokeng tungsten mine near Sanming, Fujian Province. Ninghua Xingluokeng is one of the largest tungsten mines in China. The original transportation mode was an orepass in the open pit and electric locomotives in the drift. For the purpose of enhancing the efficiency of transportation, reducing the number of workers, and fundamentally improving the operation conditions, an unmanned system for electric locos that integrates a video system, network communication system, automatic control system, electric locomotive driving system and track signal centralisation interlocking system has been introduced to manage a complete ore loading, transportation and unloading system. The number of workers in the section was reduced by two-thirds, while the transportation capacity was increased by more than 20%, and the overall automatic control level of the mine was greatly improved.