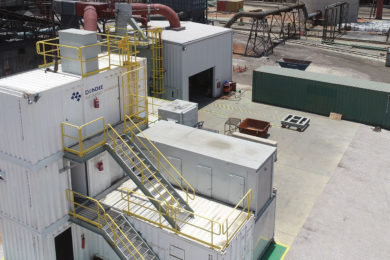 Dundee Sustainable Technologies (DST) and its proprietary GlassLock Process™ is to help a West Africa mine stabilise legacy arsenic-bearing material at its gold operation following a new mandate agreement.

The mandate agreement, entered on June 8, consists of delivering an engineering package for a plant using DST’s GlassLock Process. It follows a preliminary metallurgical test program with the same customer from back in the March quarter.

This program saw over 40 kg of arsenic- and gold-bearing material received at DST’s technical facilities in Canada, whereby DST successfully combined gold recovery with the stabilisation of arsenic using GlassLock, it said.

“As a result, the customer awarded the engineering mandate to DST to perform process optimisation and an engineering study at the prefeasibility (+/-25%) level,” it said. “The agreement includes engineering fees in the amount of C$101,000 ($74,436) to be paid to DST for this work as per its business plan to generate revenues for the corporation while the technology is progressing toward implementation.”

The final report is due at the beginning of September 2020, DST said.

Back in May, DST announced it had entered into a commercial agreement to provide engineering services to a gold and copper producer for a full-scale plant of its GlassLock Process as part of a C$600,000 Class 4 engineering package.

Since the construction of its pilot plant in 2016, DST has continued to demonstrate the validity of its technology, moving from pilot level to the industrial demonstration scale, where arsenical material was processed to generate vitrified arsenical glass, containing up to 20% arsenic while meeting the TCLP Method 1311.

“GlassLock is becoming an effective and cost attractive technique to segregate arsenic and is therefore opening new opportunities for arsenic-bearing precious metals deposits, concentrates or contaminated sites considered to contain too much arsenic to be exploited,” the company said.

This agreement is another major achievement in DST’s commercialisation efforts, it added.