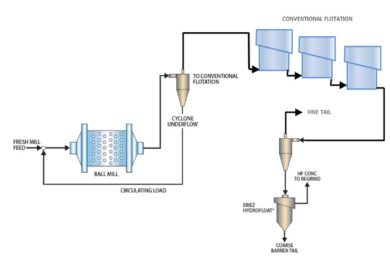 Capstone Mining is continuing to leverage innovative, low-cost technology at its Pinto Valley mine in an attempt to further utilise its existing solvent-extraction and electowinning (SX-EW) plant at the Arizona, USA, operation.

In its September quarter results, the company provided an update on this project, saying, to October 27, it had spent $17 million as part of its Phase 1 developments. This included crushing and mill equipment replacements, which are 60% complete with full completion expected by July 2021.

As part of its Phase 2 developments, Capstone spent $10 million in conveyor, mill auto controls, cyclone packs and tailings thickener upgrades. These upgrades are planned to be completed by the end of the September quarter of 2021.

On top of this, the miner completed a blast fragmentation optimisation project to target 30% fines (minus-0.5 in) in run of mine feed in the June quarter. In the same quarter, it completed a $300,000 tele-remote Cat D10 Dozer project to increase worker safety for high-risk applications. Another $6 million was spent on new mine equipment to increase efficiency while lowering diesel consumption, greenhouse gas emissions and other operating costs by $800,000/y. This project was completed in the September quarter.

In terms of its metallurgical innovation, the company continued to use novel catalytic technology developed by Jetti Resources at Pinto Valley, expected to deliver 300-350 MIb of copper cathode over the next 20 years from high-grade mine waste and historic stockpiles at all-in costs under $2/Ib. This technology uses a catalyst on primary sulphide minerals to disrupt the sulphur metal bond of the mineral and allow for a leaching solution to contact the copper. This enables the extraction of the metal to take place unimpeded.

Capstone also made plans to use new reagents to improve worker safety and improve overall metallurgical performance at its molybdenum plant re-start project. This would involve “minimal capital” and completion was targeted by the March quarter of 2021, it said.

The HydroFloat fluidised bed assisted flotation cell has previously proven effective at floating coarse ore particles, up to two to three times the size limit of conventional flotation cells in commercial applications such as at Newcrest Mining’s Cadia Valley operation in Australia. Newcrest has recently decided to expand the use of this technology at the operation.

Capstone says the lab results at Pinto Valley had led Eriez to report an opportunity to reduce copper losses by up to 50%, thereby boosting overall recovery by up to 6% at Pinto Valley.

Other benefits could be lower grinding costs, lower water and energy consumption and increased tailings stability via coarser tailings.

Pilot testing is due to commence in November with results expected back in the March quarter of 2021.

Lastly, work on PV4 expansion scenarios to take advantage of around one billion tonnes of measured and indicated resources at 0.30% Cu continued during the September quarter.

“Given management’s confidence in PV3 Optimization progress to date, including the successful implementation of the novel catalytic technology from Jetti Resources to enhance leaching performance, Capstone has decided to evaluate expansion scenarios using existing assets rather than building new mill infrastructure,” the company said.

The study is assessing higher mining rates, higher cutoff grades to the mill, and an increased tonnage available for leaching.

While a significant mill expansion is not currently being contemplated, an expansion of Pinto Valley’s SX-EW capacity of 25 MIb/y may be necessary, it said. Extensive column leach test work will be conducted over 2021, with the overall PV4 expansion study expected to be released in 2022, Capstone added.