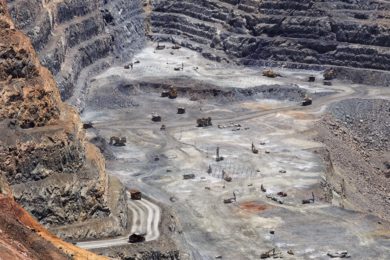 While LTE provides undeniable benefits to users of all kinds – including a high level of predictability, quality of service and connectivity at longer distances than Wi-Fi style networks – its application in mining creates some specific challenges regarding its use, 3DP reports.

This is exacerbated as most industrial LTE User Equipment (UE) is not operating in a MIMO antenna configuration in both downlink and the uplink, 3DP says. As the technology is geared towards downloading from the network to the UE, the UE (alternatively called the LTE modem or CPE) will use both of its antennas to receive the signal, which aids in higher throughput transmission of data. When operating in the uplink mode only, one antenna will transmit to the LTE network. “Another way of explaining it is that with two antennas typically available, both are physically capable of receiving but only one is physically capable of transmitting,” the company says.

This can be problematic in mining as the size of the vehicles can effectively shadow the single transmit antenna on one side of the vehicle from the LTE base station it needs to connect to.

This issue is solved with the Osprey Intelligent Endpoint®, according to 3DP, as the company has designed an intelligent dynamic switch for the transmit function of the endpoint. This RF switch is implemented independently from the LTE modem, providing flexibility in the choice of modem integrated into the Osprey.

“This means that if the switch’s decision to change antenna was based on just connection quality every time the machine moved it would switch antennas, flap, and create a loss in performance,” 3DP says. “The hysteresis algorithm has a configurable threshold so that a switch will not happen unless the performance increase is significant. We’ve also implemented a configurable delay that can be set to match the dynamics of the movement of the environment. The result is an endpoint that is responsive to the mining environment but not at the cost of performance.”

As an example, miners that only have access to public LTE will typically be dealing with network coverage and capacity that was never intended for the purpose of mobile mining applications. In contrast, purpose designed and built private LTE networks should be more performant in relation to these applications, 3DP says.

“The ability to configure the Osprey to adapt to either scenario, or anything in between, means that our customers will get the most out of their network regardless,” the company says.

The second challenge refers to the fact current mining applications are layer 2; that is, they operate at the MAC level of the network, according to the OSI 7-layer model.

LTE is a layer 3 technology, which uses segmented routing over IP.

To solve this issue a layer 2 fabric needs to be created on top of the layer 3 network. Traditionally there are multiple ways of doing this: GRE, L2TP and IPSEC are all examples of “old school” tunnels very much like a VPN.

“The problem with these options is that they aren’t ‘stateless’ and this creates more complication around how detection of broken tunnels is performed and connection re-establishment time,” 3DP says. “This incurs lost connection time and ultimately dropped packets – which equals poor performance.”

The mining industry looked to L2 technologies that came about from large-scale data server deployments. A tunneling protocol called VXLAN has become the prevalent solution in mining but the solution isn’t cut and dry, according to 3DP.

“VXLAN doesn’t support packet fragmentation and reassembly, and that creates problems for our miners using LTE as the network technology,” 3DP says. “Typical LTE deployments only support a maximum MTU packet size of 1,500 bytes so if a packet from an application operating over the network is larger than that, the packet will be dropped. One somewhat clunky workaround is to manually set applications to send smaller packets or to lower MTU size on a per device basis.”

Tunneling solutions require a back-office appliance that supports the tunnel creation and operates as a concentrator for all connections out in the field, according to 3DP. It needs to know what client devices are operating over the network and, again, this is not a seamless problem to solve with VXLAN. The appliance needs to be constantly updated with the list of operating devices.

“We’ve chosen a different approach, and importantly, one that solves both of these issues natively, without any additional manual effort or per-device configuration of the layer 2 fabric,” the company says.