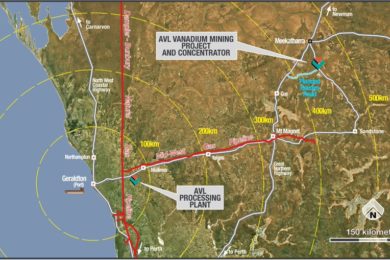 Australian Vanadium is making plans to incorporate “green hydrogen” into its mine operations in Western Australia as part of a carbon emission reduction strategy.

Vincent Algar, Managing Director of Australian Vanadium, thinks the use of green hydrogen could allow the company to reduce its carbon footprint and leverage both the economical and environmental benefits of what is a growing market.

“The green steel opportunity is one that Western Australia should particularly embrace, with the potential for many jobs to be created and a globally competitive steel industry,” he said. “This strategy can assist with environmental approvals and in attracting finance partners with an environmental, social and corporate governance focus, for AVL to bring the Australian vanadium project into production.”

The Australian vanadium project is around 40 km south-east of Meekatharra and 740 km north-east of Perth. The proposed project includes open-pit mining, crushing, milling and beneficiation at the Meekatharra site and a processing plant for final conversion to high-quality vanadium pentoxide for use in steel, specialty alloys and battery markets, to be located at a site at Tenindewa, between Mullewa and Geraldton.

The company’s strategy to incorporate hydrogen into the project includes the following areas:

AVL says its project is currently one of the highest-grade vanadium projects being advanced globally with 208.2 Mt at 0.74% V₂O₅, containing a high-grade zone of 87.9 Mt at 1.06% V₂O₅, reported in compliance with the JORC Code 2012.