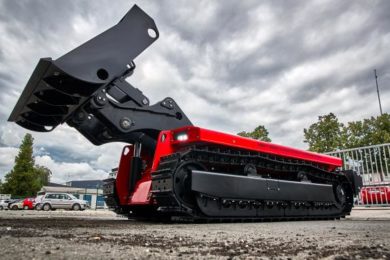 DOK-ING already has some experience with fuel cells being used on its mining machines, with a DOK-ING fuel cell mining dozer having been developed in the South African platinum industry by Anglo Platinum using Hydrogetics LOHC technology.

“We are delighted to be working with DOK-ING, a leader in specialised industrial vehicles. This serves to highlight the potential scope for deployment of our high-power density fuel cells across various mobile applications. Requiring heavy-duty usage in challenging environments, EH Group fuel cells are built to operate in the most rugged conditions. It also emphasises the widespread geographic potential of our fuel cell technology”, says Mardit Matian, Founder of EH Group.

EH Group Engineering AG was founded in 2017 and is based near Lausanne, Switzerland. It is focused on the design, development and production of its innovative fuel cell technology, across both stationary and mobile applications. It aims to deliver cost-effective fuel cell solutions, particularly where high-power density performance is required. In addition, EH Group provides engineering services relating to the deployment of its fuel cells systems across hydrogen mobility and stationary projects.

DOK-ING’s latest news in mining is that it successfully completed industrial testing of its DOK-ING XLPD Robotic System in the uranium mine of Krasnokamensk, Russia last year and the modified XLPD with bucket tool was then bought by the PJSC Priargunsky Mining and Chemical Production Association, part of Rosatom’s ARMZ mining division.

The latest XLPD was recently successfully dispatched from DOK-ING to the customer, and soon it will be followed by the client’s personnel training and XLPD underground industrial testing conducted by two experienced and skilled DOK-ING instructors.

The previous testing has demonstrated advantage of the XLPD low profile, which becomes particularly noticeable during the operations in narrow reef mines, where the tunnel height is up to 1.8 m. Since the width of uranium veins is very tight, the application of low-profile loaders provides significant increased dilution (up to 43%) in narrow bedded orebodies, ensuring higher level personnel safety and making the extraction process more effective and efficient. In addition, the said testing allowed DOK-ING to introduce small, but solid design modifications onto both the XLPD Prime Mover and its bucket tool improving general XLPD performance and tool’s loading capacity.