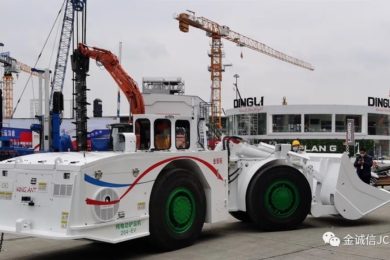 After several years of development and testing, leading Chinese mining contractor and mine development company JCHX Mining Management displayed for the first time its new all lithium battery electric 2 m3 and 3 m3 underground LHDs at the recent Bauma China show in Shanghai. The machines were developed by its JCHX Hubei division. 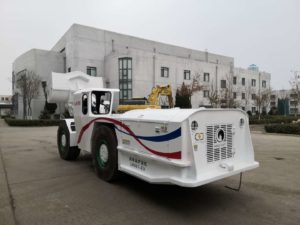 JCHX says the machines use high-energy-density liquid-cooled lithium batteries as the power source, with ultra-high-efficiency switched reluctance motors and hydraulic control gearboxes. “The wet brake axle with spring brake and hydraulic release constitutes the transmission system of the whole vehicle, which has the characteristics of advanced transmission system and strong power. The unique working curve of its switched reluctance motor enables the vehicle to have strong power and high driving speed, and its operating efficiency can be increased by more than 10%.”

The 3 m³ 7 t class machine has undergone more than a year of industrial tests in multiple scenarios and different conditions at the test minesite. JCHX states: “The test results are outstanding. It is a pure electric LHD with reliable quality, strong power and long-lasting battery life.”

The newly developed and produced 3m³ lithium-battery-driven LHD from JCHX has been trialled since the end of November 2019 at the Shouyun iron ore mine in the Miyun District of Beijing, where JCHX is the contract miner and underground developer. JCHX says the unit has achieved a long working duration, with continuous loading of 65 buckets at a working temperature of 0°C which is compatible with the site requirements; a short charging cycle, with double-port design full charging only requires half an hour; plus a high breakout force and easy manoeuvreability. The robust bucket boom enables easy mucking plus of course there is less noise & zero emissions.

At Bauma China, JCHX said on this machine: “It can be used for more than four hours of continuous loading operations or 70 buckets of ore pass operations. In a 3.2 x 3.2 section, it can complete the ore and waste discharge tasks of 2 sections. A full charge time is 30-40 minutes, and when the workers are on a shift change, the machine can remotely complete more work. The operating cost is about 60% of a diesel LHD of the same class.”

The working environment for the operator is improved significantly as local high temperatures caused by an engine no longer exist; JCHX: “to sum up this product achieved energy-conservation, environmental protection, low breakdown, improved safety and higher economic benefits at the same time.” 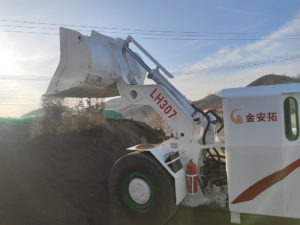 The new colour scheme of the LHDs refers to the JCHX flag/logo, while the product has been officially named as “King Ant” with the corresponding Chinese name having been registered at Administration for Industry & Commerce. The red, blue and white used on the body are the basic colours of the Jinchengxin (JCHX) flag. The red stripe shows J when viewed from the back, and C when viewed from the bottom up. The red and blue stripes cross and show X, which stands for JCHX, which is the English abbreviation of the company’s name. The King Ant name reflects the fact that it is an articulated machine, capable of lifting things far heavier than its own weight, implying a strong product carrying capacity.

JCHX adds: “In recent years, as part of government policy and national reform, more attention has been driven to environmental protection, sustainable mining development as well as green mining technology…redesign and upgrading of mining equipment based on new energy to be clean, zero-pollution, highly-efficient and automated is inevitably a necessity. Under such circumstances we believe our lithium-battery-driven LHD has distinct advantages in terms of safety, environmental friendliness, operational convenience, maintenance accessibility, as well as automation.”

The successful commissioning of the 2 m3 battery electric LHD (which was initially given the name JCY-2 during trials but is now also using the King Ant brand) was achieved on July 8, 2019 at the Lujiang pyrite mine near Hefei City in Anhui Province, which is owned by Anhui Jinniu Mining. At the time JCHX said: “JCY-2 is a battery-driven, free of pollution and highly agile LHD, which is designed and developed for the purpose of minimising environmental pollution, reducing equipment operation cost and protecting employees’ occupational health.” 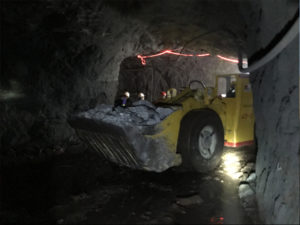 JCHX says some of the transverse drifts at the Lujiang project are quite long with comparatively small sections, which leads to greater ventilation demands which was the main driver for the JCY-2 machine development. During 2.5 hours of operation at the 8-0 ore pass on the -296 metre level, the battery was reduced from 100% down to 47%; 14 draws (approximately 34 m³) weighing 120 t were loaded with the loading point located 160 m from the ore pass. The fan was not activated during the operation of JCY-2, while the ambient temperature remained unchanged. According to the charging data, it only takes 35 minutes to charge the JCY-2 from 20% up to 100%, with power requirements of 60 kWh. 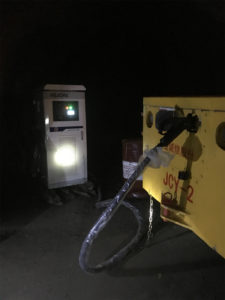 Both machines are also capable of autonomous operation. “The vehicle control system adopts a CANbus network, which is divided into three parts: operation, transmission and man-machine interface. It is equipped with tailorable local remote control and automatic driving systems based on a SLAM algorithm…the unmanned, intelligent, and digital mining system can help customers realise the overall or partial unmanned operation of the mine and optimise the mine dispatch system.”