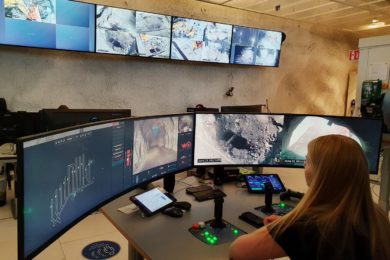 Autonomous operations are stepping up at LKAB’s Kiruna asset, in northern Sweden, with the underground iron ore mine adding another two autonomous loaders to its fleet this month.

The company says new technological solutions leveraging automation and digitalisation are needed as mining proceeds to ever greater depths at Kiruna.

“We are already operating three automated loaders, and, in December, we will scale up to five units,” Mikael Winsa, Production Manager at Kiruna, said.

LKAB is well acquainted with automated and remote loading, having started using this technology all the way back in 2000.

Magnus Lindgren, Production Manager for Remote Operations, says: “The infrastructure is much better today and there are better conditions for doing it really well. All of the components to make this work, for example, the network, are now more mature and stable.” Lindgren has been with LKAB since 1994 and worked with the first driverless loaders when they were introduced.

Today three 21 t Sandvik LH621i loaders are operated from a control room at level 1365 in the mine. Sandvik also provides the software that makes it possible to control the machines at some distance from the production area.

Winsa added: “The traffic system has revolutionised automated loading. It allows us to run several machines at the same time, in the same area, and back and forth to the same destination. This is a great leap forward in terms of technology and development.”

This mean significantly more buckets of ore can be hauled over a 24-hour period; something not possible after blasting with conventional loaders, since personnel cannot be exposed to blasting gases.

Lindgren says: “In some ways, this is a completely new approach to loading and production. It is very exciting to take part in this journey and contribute to a solution for mining at greater depth.”

Lindgren said the company is also in the initial phase of launching Epiroc’s remote loading system: “The system is now being fine-tuned and we plan to commission the traffic system early in the new year.”

The automated loaders navigate through the drifts safely and efficiently, according to LKAB. Cameras are installed at the front and back of the machine, which means the operator can follow the loading progression in real time. In addition, one operator can run several machines simultaneously.

“We are able to increase both availability and production by operating more automated loaders,” Lindgren said. “But this doesn’t mean that the manually-operated machines have outlived their usefulness. It just means that we have more tools in our toolbox.”

And the flexibility this enables is the key to mining the Kiruna orebody at greater depth, not least after the seismic event that occurred on May 18, which affected several of the production areas. This has meant fewer areas must produce more ore. In that context, automated loaders are a necessity.

Winsa concluded: “We are always taking small steps forward. It feels like we’ve crossed a threshold and can see many new possibilities leading into the future.”