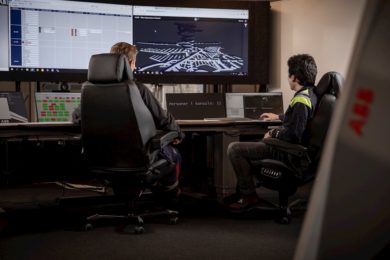 ABB electrification and automation knowledge and solutions are being employed at LKAB’s Sustainable Underground Mining (SUM) project, as the project partners strive towards demonstrating the possibility of developing a mine with zero carbon dioxide emissions and relative productivity increases of 50%.

The company has provided electrification, connected control and operations management systems, high-visualisation and mobile operator workplaces as part of this project, which also involves Combitech, Epiroc and Sandvik. It is now looking to connect electrical and automation systems that have so far been developed and leverage these in a demonstration workshop as part of the project’s next phase.

Devised by LKAB, the SUM project has the goal of setting a new world standard for sustainable mining at great depths. The framework outlines ambitions for zero carbon dioxide emissions, completely safe mines for humans, productivity increases of 50% and deeper mining.

ABB will continue to contribute its deep knowledge in electrification, automation and workplaces together with other suppliers to the mining industry, it said.

Test work in LKAB’s Kiruna mine, northern Sweden, as well as a virtual test mine will study the best way to build a carbon dioxide free and autonomous production system.

“Within the mine, the Konsuln orebody is used to demonstrate future workplaces in a decentralised environment with efficient use of an autonomous electrical mobile transport system in a mixed environment,” ABB said. “Real-time process information is available to all organisations involved. When combined with the wider efforts of the SUM partnership, this shows a way of bringing completely new technology solutions to market for safer, more sustainable and more efficient mining production processes.”

Jan Nyqvist, Global Product Manager for Underground Mining Automation at ABB, and one of the leaders in the project, said: “We are taking significant strides towards a vision of the future operator environment through smarter working and demonstrable results. Electrification and automation are two important factors for the mining industry to continue its rapid, but effective, modernisation. Sharing of information and data is crucial to reach substantial end goals.”

He added: “It is becoming increasingly common for suppliers to create dedicated collaboration groups to reach the best possible solutions for their customers. Collective successes and progress and the meeting of key targets for SUM, are initial evidence of the mutual benefits of collaboration.”

ABB has a relatively large team committing time to the project, with experts in digitalisation and research, as well as electrification and automation.

“ABB is integral to the next step, which is to build a demonstration workshop to connect electrical and automation systems that have so far been developed for this challenging project,” Nyqvist said. “We will, through various developed scenarios, be able to show how the systems work together.”

By 2022, the ABB electrification and automation solutions will be fully installed, and the aim is that a new standard for mining production will be displayed at the project by 2030.