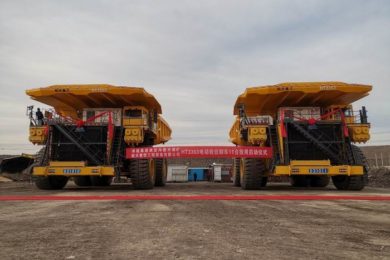 On December 28, 2020, the launching ceremony was held for the final commissioning of numbers 10 and 11 of a fleet of 11 363 t (400 t) HT3363 electric-drive mining trucks by China Space Sanjiang Group (CSSG)-owned Aerospace Heavy Industry (AHI) with the customer, the 34 Mt/y capacity Heidaigou open pit coal mine in the Ordos Basin region of Inner Mongolia, part of the Zhungeer mining complex of national coal mining group CHN Energy and operated by Zhunneng Group.

The 363 t truck has been independently developed by Aerospace Heavy Industry and is about 15 m in length, 10 m in width, and 8 m in height, with a dead weight of 237 t, a rated load of 363 t, and a full load weight of 600 t. The first units were delivered to Heidaigou in 2016 and are operated under a rental system by Zhunneng, which uses this approach now for much of its primary fleet.

AHI says the HT3363 has been proven at the mine in winter to summer temperature extremes and has achieved an average availability of 90%, with an average annual haulage capacity of 1.5 million cubic metres but being capable of up to 2 million cubic metres. The company also sees the model as significant in helping to end what it sees as a foreign monopoly in ultraclass truck supply in China. The model is equipped with an MTU 20V4000 C23 engine offering 2,800kW/1,800 rpm with the Cummins QSK78 as an option and uses 59/80R63 mining tyres. The electromechanical transmission is based on a Siemens MMT400 AC drive.