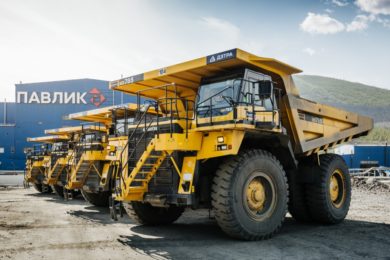 At the Pavlik GOK gold mine in Russia’s Far East Magadan region, nine Komatsu 91 t class HD785-7 dump trucks operated by contract miner Detra LLC have been equipped with the Caterpillar DSS safety system, which alerts the driver in real time to fatigue and distraction. This decision was made based on the results of testing, which was carried out on five dump trucks over three months, from January to April 2020.

The Cat DSS driver safety (fatigue monitoring) system is an on-board driver assistance system that also transmits data to the management via the company’s local network. Thus, Pavlik says, it is possible to efficiently and efficiently organise the work process by setting the correct work schedule.

Cat DSS measures the time the eyes are closed and the position of the head while the truck is moving. Automatically detects if you are falling asleep or distracted from the road and immediately notifies the driver about it with sound alerts and vibration in the seat back, in addition, the built-in GPS system tracks the route and indicates any deviations.

Mining contractor Detra LLC started work in June 2019 at the Pavlik gold deposit. The first units of equipment were launched on June 21, 2019 (two dump trucks and an excavator), with additional deliveries in the interim bringing the current fleet to nine Komatsu HD785-7 trucks and two Komatsu PC1250 hydraulic excavators, a Komatsu 375 bulldozer, an Epiroc ROC D60 drilling rig, plus auxiliary and repair vehicles. Detra is contracted to haul 400,000 m3/mth. It also has the drilling contract which was signed until 2025, and includes drilling of 14,000 linear metres of blast holes every month.

The mine is also undergoing a major expansion of mine production rates, as it is doubling its ore processing capacity, for which a large Komatsu P&H 2300XPC rope shovel was added in late 2020, which will load a new Cat 789D truck fleet. It refers to this as the second mine stage. Pavlik GOK CEO Sergei Terentyev recently said: “We would like to note that the management and all employees of the Detra company pay great attention to industrial safety and labour protection at work. For our part, highly assessing the level, quality and timing of work performed by our contractor – Detra LLC, we are considering the possibility of attracting the company to work on the second stage of Pavlik mining and processing complex.”