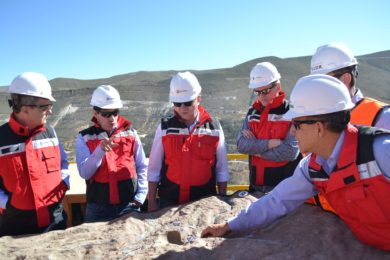 Anglo American has approved the construction of a coarse particle recovery (CPR) plant at its in-development Quellaveco copper project in Peru.

The announcement came within the company’s 2020 financial results, which showed Anglo generated underlying EBITDA of $9.8 billion and a profit attributable to equity shareholders of $2.1 billion for the year.

CPR, Anglo says, is one of many significant breakthrough technology initiatives that has the potential to increase throughput and productivity, while simultaneously reducing environmental footprint, through rejection of coarse gangue (near-worthless waste material), dry stacking of sand waste, minimising the production of traditional tailings and reducing overall water consumption.

The CPR plant signoff at Quellaveco follows a full-scale demo plant installation at the company’s El Soldado mine in Chile – which is ramping up to full capacity by mid-2021 – and the decision to construct a full-scale system at the Mogalakwena North PGM concentrator in South Africa.

The El Soldado plant used the HydroFloat™ CPR technology from Eriez’s Flotation Division. Here, a single 5 m diameter HydroFloat cell, the largest in the world, treats 100% of mill throughput, with the objective of proving the waste rejection process at full scale.

Anglo said of the Quellaveco CPR plant: “This breakthrough technology will initially allow retreatment of coarse particles from flotation tailings to improve recoveries by circa-3% on average over the life of the mine. This investment will also enable future throughput expansion which will bring a reduction in energy and water consumption per unit of production.”

The capital expenditure of the CPR project is around $130 million, with commissioning of the new plant expected in 2022. DRA Global previously carried out a feasibility study for the CPR plant at Quellaveco.

In terms of Quellaveco project progress, Anglo said today that, despite the COVID-19-related slowdown, first production was still expected in 2022. This was, in part, due to the excellent progress achieved prior to the national lockdown, and based on optimised construction and commissioning plans, Anglo said.

Key activities in 2021 include the start of pre-stripping, which will see the first greenfield use of automated hauling technology in Peru; progressing construction of the primary crusher and ore transport conveyor tunnel to the plant; completion of the 95 km freshwater pipeline that will deliver water from the water source area to the Quellaveco site; completing installation of the shells and motors for both milling lines; and completion of the tailings starter dam.