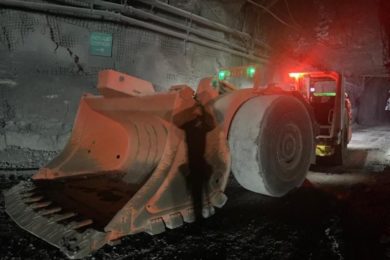 Following shipment from Camarillo, California, the first Sandvik Mining & Rock Solutions battery electric 18 t LH518B loader in the world is now underground starting field tests at New Gold Inc’s New Afton block cave gold-copper mine in British Columbia, Canada. Sandvik says initial feedback from operators is that it is unbelievably quiet & they really like the instant torque. The loader features Sandvik’s AutoSwap technology, which allows easy battery exchange in about six minutes, as well as AutoConnect, which allows the operator to complete a battery swap without leaving the cabin.
New Gold has said that that the introduction of these vehicles is an important step in its C-zone development and greenhouse gas reduction targets. The LHD is being joined by 50 t class battery electric Z50 trucks from Sandvik-owned Artisan Vehicles. The LHD is an 18 t Sandvik LH518B, and a battery bolter – the Sandvik DS412ie. New Gold told IM: “We will see what positive results that may be achieved with the overall objective of adding more electric/ battery pack equipment. C-zone will have a charging network.”
The C-zone block cave zone is located approximately 550 m below Lift 1. Development towards the C-zone is underway with production planned to commence with the first of 143 planned drawbells in July 2023. The C-zone block cave will be producing from 2023-2029. Ore segregation is planned to improve mill grades while a second crusher and underground conveyor system extension for materials handling is to be installed.